Monkeypox Simulation: A report of ‘predictions’ turning into reality; mirroring the Covid-19 script 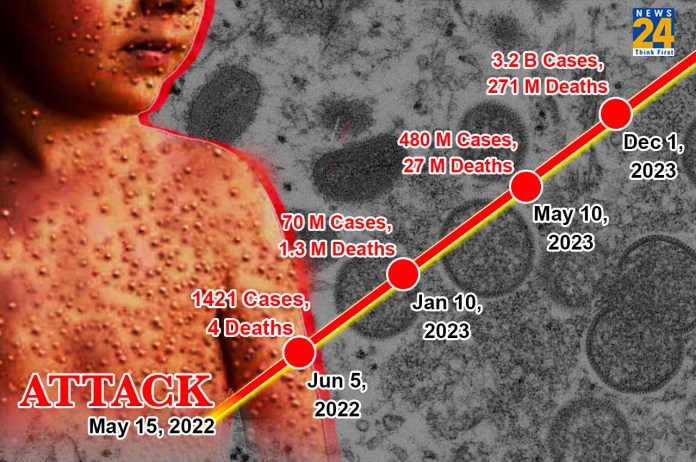 New Delhi: A tabletop simulation was conceded in March 2021, at the Munich Security Conference and Nuclear Threat Initiative with the aim of reducing the spread of Monkeypox Virus.

In March 2021, a tabletop simulation was run for reducing “high-consequence biological threat” at the Munich Security Conference in partnership with the Nuclear Threat Initiative (NTI). The aim of this exercise was to examine the gaps in national and international biosecurity and pandemic preparedness.

The aim of this exercise was to portray a global pandemic which involved an unusual strain of the monkeypox virus. According to the stimulation the virus emerged from a fictional nation Brinia and spread throughout the globe within a time frame of 18 months.

The scenario of this exercise was based on the hypothesis that the initial outbreak was caused by a “terrorist attack”. The bio-attack was tagged to a laboratory engineered pathogen with inadequate biosafety and biosecurity provisions and a weak oversight.

The fictional exercise scenario was unveiled gradually through a series of short videos to which the participants were asked to react during a facilitated discussion. Key themes of the event emerged regarding the strengthening of international pandemic risk assessment and an early warning system; to make certain that clear triggers for national-level anticipatory response and aggressive early action to slow disease transmission and save lives; to reduce biotechnology risks and enhanced oversight of life sciences research; to promote new and stronger international health security financing mechanism.

The exercise might have been considered futile at the time, but it is turning into reality as the outbreak of the Monkeypox is slowly and steadily gripping outside Africa. It is important to note that the first case of the Monkeypox was discovered in monkeys kept for research in 1958. Whereas the first human infection of monkeypox was detected in 1971.

Towards the end of the exercise (dated around January 2023), the fictional pandemic resulted in over 3 billion cases of infection and 270 million deaths throughout the world.

In May 2022, the scenario is turning into a reality. However, the main question remains that whether such exercises have any role in prevention of such outbreak. How is it possible to have an oversight of the infection spread, way beforehand and yet the international stakeholders who claim to be the mascot of public health on a global level fail to stop such a spread?

One way of finding this out is by having a relative view of the Covid19 pandemic, where the virus was originated in the city of Wuhan. It must also be noted that the Wuhan Institute of Virology was running the “Gain of Function” research which allegedly gave birth to the Corona pandemic that severely impacted the world. A delegation was sent to Wuhan which had over 20 members that went to determine the origination theory of Covid19. However, the final report prepared by them was “inconclusive” in determining the origination theory.

The exercise was designed for participants to:

Outbreak and Spread of Monkeypox in Brinia

The first phase of the scenario predicted that the outbreak of the monkeypox began in the fictional nation of Brinia on May 15, 2022. The spread caused 1,421 cases with 4 deaths with no international warnings or advisories.

The government of Brinia calls for an international investigation of the outbreak and sought medical support from the World Health Organisation (WHO). Following the outbreak, genome sequencing of monkeypox patient samples revealed that the strain has mutated, and the existing vaccine are basically ineffective in containing the spread.

The spread of the virus on January 10, 2023, had affected 83 countries with 70 million cases and 1.3 million deaths. The hypothetical tabletop simulation of the monkeypox virus turned out to be vaccine-resistant in the international supply chain. Does this sound familiar?

Origin by a terror group

On May 10, 2023, the simulation predicted that the cases neared 480 million infections and 27 million deaths. The simulation further unveiled involvement of a terror group that had infiltrated a civilian biolab.

By December 1, 2023, the cases rose to 3.2 billion infections and 271 million deaths. The simulation also outlined the fact that a global difference towards response following the outbreak contribute significantly to different sort of outcomes.

The simulation further unveiled that the Brinian Intelligence revealed that the monkeypox virus was engineered within a fictional country of Arnica. A leading institute of virology developed the virus in Arnica. Brinia ad Arnica have had a history of conflict.

An independent terrorist group SPA worked out with sympathetic laboratory scientists and developed a highly contagious, deadly pathogen and dispersed it a crowded train station in Brinia during a national holiday.

The final phase of the exercise was a roundtable discussion that considered disparities in public health preparedness around the globe and the resulting need for more effective financing mechanisms to accelerate pandemic preparedness capacity building.

Recognizing that pandemic preparedness requires costly investments that lower- and lower-middle income countries cannot afford to make, participants were asked to discuss strategies to catalyse these investments in sustainable way.

Conclusion of Exercise Discussions and its Findings