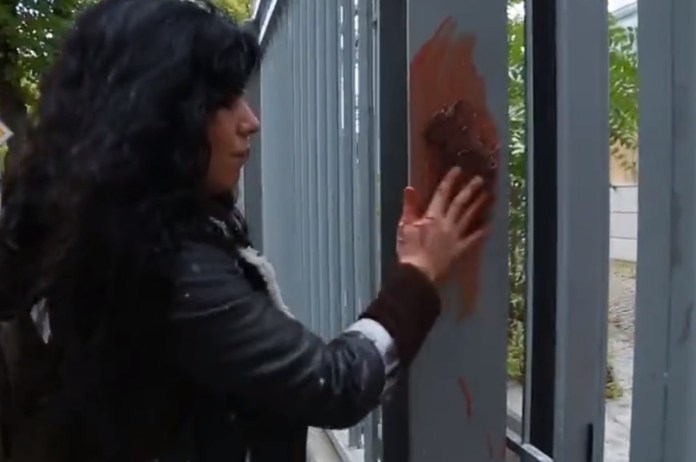 New Delhi: Kurdish artist and journalist Zehra Doğan has once again resorted to a unique way of protesting. She used henna, hair and menstrual blood for her ‘artistic protest’.

Amidst the ongoing protests in Iran, Zehra Doğan did something that would flush out the sense of disgust from individuals who have long been indoctrinated with “Iranian conservatism”.

The matter has come to light from Berlin, Germany. Here a woman named Zehra used the paste of henna, hair and menstrual blood and painted it on the walls of Iranian consulate. Her act was registered as support for the ongoing protest across Iran.

Doğan was accompanied by journalist Ulaş Yunus Tosun, who was filming the action. They were taken into police custody but were later released at around 3.30 pm (local time).

What happened with Mahsa Amini?

A young Iranian woman, who fell into coma following her arrest in Tehran by the notorious morality police, died on Friday, state media and her family said. A large number of activists have been urging the authority to hold the culprits responsible for her “suspicious” death.

Mahsa Amini, 22, was detained by the police division in charge of implementing the Islamic Republic’s stringent dress code for women, which includes the need that they wear head scarves in public, on Tuesday while she was visiting the Iranian capital with her family.