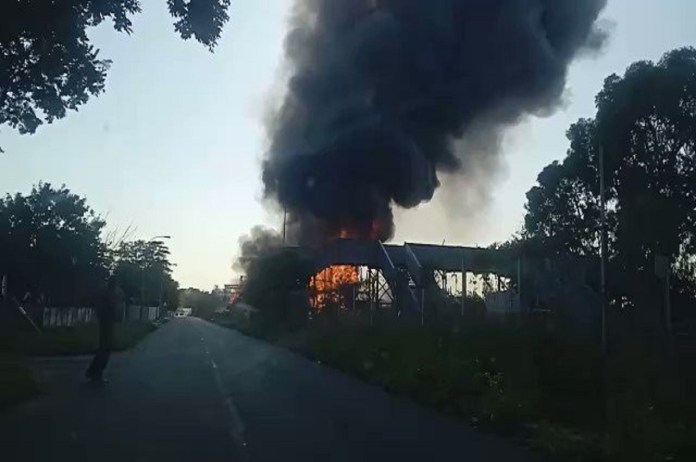 Johannesburg: At least 10 people died and several others injured in an explosion of a fuel tanker in the South African city of Boksburg on Saturday.

“Reports from the scene are that a tanker carrying L.P gas caught fire following a collision which led to it exploding… Ten people suffered fatal injuries. Several others were treated for injuries ranging from minor to moderate,” Emer-G-Med, an ambulance service operating in Boksburg, said, as reported by Sputnik news agency.

“Apparently, a gas tanker drove under the subway bridge and got stuck in there, and due to friction, it caught alight,” emergency services spokesperson William Ntladi told South African media.

🚨#BREAKING: Numerous injuries reported after fuel tanker explodes⁰⁰📌#Boksburg | #SouthAfrica⁰
There was a huge explosion in Boksburg in South Africa as It’s believed a petrol tanker went under the bridge at Railway Street in Boksburg and scraped, leaked the fuel and exploded pic.twitter.com/p0f5858a2k

He said six firefighters were called to the bridge to help. “While doing the fire suppression, there was an explosion that took place.”

He added that a fire engine and two motor vehicles were destroyed by the blast.

The injured were transported to the nearby Tambo Memorial hospital.

Several houses, cars and a hospital in neighbouring areas were also affected by the explosion