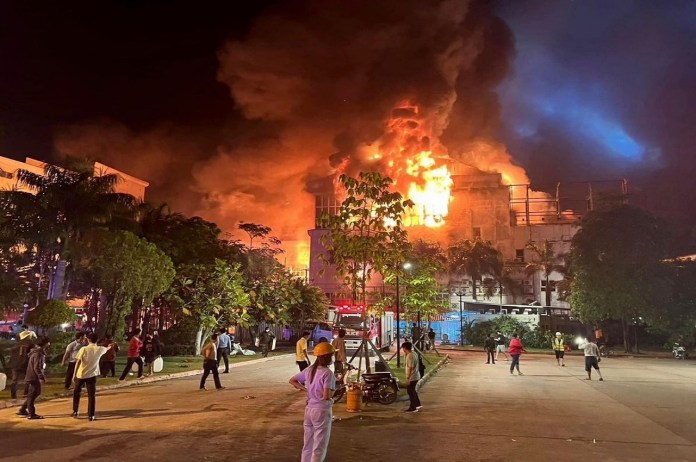 Cambodia hotel fire: Massive fire broke at the Grand Diamond City casino in Poipet, Banteay Meanchey province on Thursday At least 10 people dead and over 30 injured in a fire incident, according to The Phnom Penh Post.

According to report in The Phnom Penh Post, Nhem Phoeng, chief of administration at the Poipet town hall, said that as of the morning of December 29, the flames were out of control. According to Phoeng, the Grand Diamond City casino is host to more than 400 people, the bulk of them are Thai.

Cambodia hotel fire: The majority of the fatalities, according to Phoeng, were Thai and Cambodian workers.

He further added that the injured people had been sent to a nearby hospital for primary treatment.

In Thailand’s Sa Kaeo province’s Aranyaprathet area as of 9:10 a.m., more than 10 people had perished and more than 30 others had been injured, according to Nhem Phoeng, who was quoted by The Phnom Penh Post.

According to The Phnom Penh Post, the National Committee for Disaster Management (NCDM) vice president Kun Kim announced that commandos and helicopters had been dispatched to the area to rescue people trapped inside the casino, which is close to the Poipet International Border Checkpoint. The cause of the fire was being investigated by the authorities.

shocking video from the site showed people jumping to escape the flames from the fifth storey and plummeting to the ground below.

In addition to significant damage, there were reports of the structure partially collapsing; nonetheless, firemen eventually claimed to have about 70% of the fire under control.

Several hours into the fire, which is believed to have started about midnight, other portions of the building were also spotted to be dangerously “leaning.”

However, according to current report, nearly 50 people are reported to be trapped inside the Grand Diamond City hotel in Poipet as the fire continued to rage for several hours.