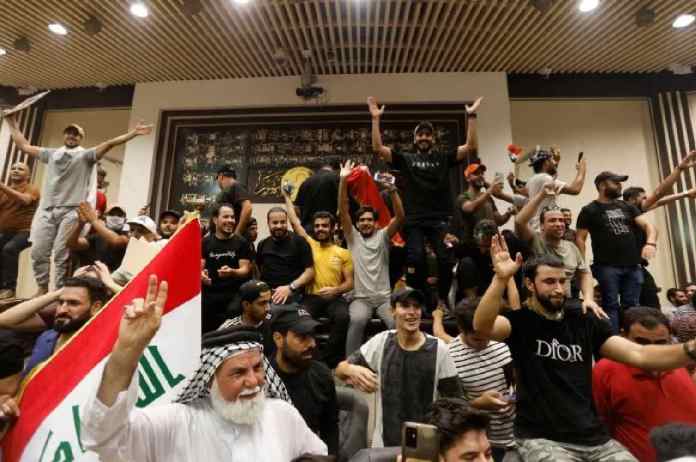 New Delhi: Protestors have stormed Iraq’s Parliament on Wednesday. Thousands of people have gathered in the premise of Baghdad’s Parliament. There were curses and sloganeering against anti-Iran.

Protestors are followers of a cleric

The people are protesting against the selection of a nominee who is backed by Tehran-backed political outfits. As per Al-Jazeera a lot of these protestors are followers of Iraqi Shia leader Muqtada al-Sadr.

Lawmakers were not present at the time of breach

At time of the when these protestors entered the building none of the lawmakers were present. As per Baghdad’s security protocol the Parliament is located in the high-security Green Zone.

The place houses many government buildings and diplomatic. However, security forces present inside the building appeared to allow the protestors to barge in with relative ease.

The protestors are opposing the candidature of Mohammed Shia al-Sudani. He is a ex-provincial governor and a former minister. He is the pro-Iran’s Coordination Framework’s choice for the post of Prime Minister.

Prime Minister Mustafa al-Kadhimi have ordered the protestors to “immediately withdraw” from the Green Zone.

Videos have started emerging across the social media platforms.

Ashok Swain, Professor of Peace and Conflict Research, Uppsala University wrote, “People are protesting inside Iraq’s parliament. In the so-called largest democracy, even MPs are not even allowed to protest!”

People are protesting inside Iraq’s parliament. In the so-called largest democracy, even MPs are not even allowed to protest! pic.twitter.com/PFMFvkUI52

Baghdad Iraq 🇮🇶 Demonstrators have stormed the parliament buildings in protest against the nomination for Prime Minister by Iran-backed parties….It’s happening everywhere, almost by design…. pic.twitter.com/zjA6rmV1eU

Another user @kingofSomaliaa wrote, possibly in context of Somlia, that Somalians need to learn from Iraq and Sri Lanka.

We need to learn from🇮🇶&🇱🇰. The day we close Halane is the day #Somalia🇸🇴will be peaceful. Iraq had a green zone, similar to our Halane, & the day they closed it, Iraq became a peaceful country.