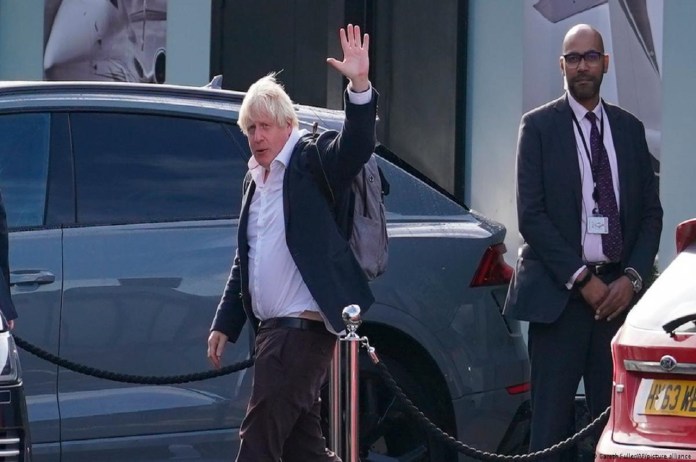 London (UK): Former UK Prime Minister Boris Johnson pulled himself out of leadership race of the Conservative party despite claiming he had the adequate support after, media reports said on Monday.

Johnson said he had come to the conclusion “this would simply not be the right thing to do” as “you can’t govern effectively unless you have a united party in Parliament,” reported Independent. He also added that this was due to the failure to reach a deal with Rishi Sunak and Penny Mordaunt. “I am afraid the best thing is that I do not allow my nomination to go forward and commit my support to whoever succeeds,” he said.

He said he had support of enough lawmakers to progress to next stage but far fewer than front-runner former finance minister Rishi Sunak, reports Reuters

Johnson added, “I believe I have much to offer but I am afraid that this is simply not the right time.” “I believe I am well placed to deliver a Conservative victory in 2024 – and tonight I can confirm that I have cleared the very high hurdle of 102 nominations, including a proposer and a seconder, and I could put my nomination in tomorrow.”

“With members of the Conservative Party, there is a very good probability that I would win the election, and I could actually be back in Downing Street on Friday.” But over the past few days, I have regrettably come to the terrible realisation that doing this would be morally incorrect. Without a cohesive party in parliament, you can’t properly govern, he continued, according to Independent.

It is important to remember that Johnson’s campaign staff previously informed supporters that they had obtained the 100 MP nominations required for the former prime minister to appear on the ballot.

Johnson returned to Britain on Saturday after vacationing in the Caribbean, which was perceived as a formal application.

Johnson had before stated that he would be “up for it” to run for prime minister.

In the meantime, after Liz Truss’ resignation as prime minister placed the nation in a state of political unrest, Britain’s former finance minister Rishi Sunak on Sunday confirmed his candidacy to run for prime minister of the UK.

Through his social media accounts, the former Chancellor of the Exchequer of Indian heritage announced his decision and stated that he wanted to rebuild the British economy, which is currently experiencing a serious problem.

Sunak tweeted the following in a message: “Although the UK is a wonderful nation, we are currently experiencing a severe economic crisis. I’m running to be the Conservative Party’s leader and your next prime minister because of this.”

Rishi Sunak – who as Chancellor oversaw the highest inflation in 40 years, the biggest drop in living standards since 1956, the biggest fall in wages since records began & UK trade performance at its worst level on record has just tweeted he wants to “fix our economy” pic.twitter.com/3BTRQvIqUk

Sunak wrote, “I want to improve our economy, bring our Party together, and deliver for our country.” Following Truss’ resignation as prime minister on Thursday in response to the opposition’s renewed call for a general election, Sunak made his declaration.

The leader of the Tories in the Commons, Penny Mordaunt, entered the race on Friday. Mordaunt wrote, “I’ve been inspired by support from colleagues who desire a new beginning, a united party, and leadership in the national interest.

On Monday, Tory MPs will vote, and unless one withdraws from the campaign, two candidates will be nominated for the party’s leadership. Friday, October 28 will see the announcement of the outcome.

Notably, Truss was elected as Britain’s leader and resigned 45 days later, becoming the country’s shortest-serving prime minister after admitting she “cannot deliver the mandate” on which she was elected. For a new leader to be appointed within the following week, Truss declared that she would step down.

Keir Starmer, the leader of the Labour Party, attacked the Conservative Party in a stinging statement following Truss’ resignation and demanded a general election. “The British people deserve so much better than this never-ending state of upheaval after 12 years of Tory failure. A general election is now required “said he.

Budget Session 2023: Tough road for Government to woo all sections