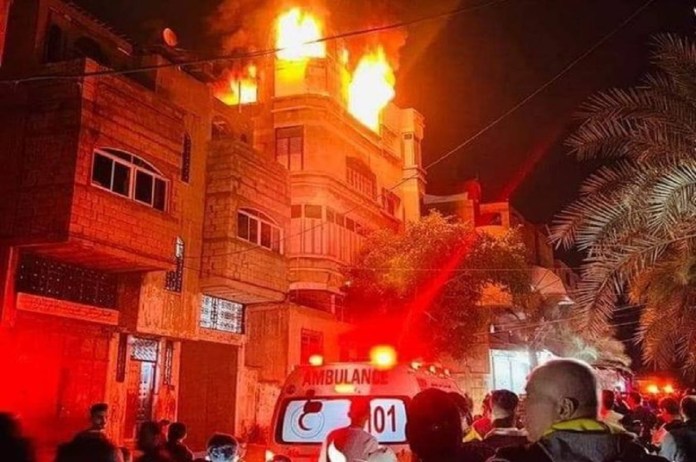 Gaza: At least 21 people were killed, including seven children, and more than 30 injured after a major fire broke out inside a residential building in Gaza strip, health and civil emergency officials said on Thursday.

According to a Reuters report, the firefighters took more than an hour to get control of the massive flames that burst through the top floor of a four-story residential building in the densely-populated Jabalia refugee camp in the northern Gaza Strip.

“Some of the injured were in serious condition and the death toll from the fire incident is expected to rise,” said Salah Abu Laila, director of the Indonesian Hospital that received the victims.

Gaza’s Interior Ministry said an initial investigation revealed that large amounts of gasoline had been stored at the site, fueling the blaze that quickly engulfed the building.

Palestinian President Mahmoud Abbas called it a national tragedy and said there would be a day of mourning,with flags to be flown at half-mast.

Israeli Defence Minister Benny Gantz tweeted that his staff would assist with “humanitarian evacuations of the injured to (Israeli) hospitals”, expressing sympathy for the “serious disaster” in Gaza.

Tor Wennesland, the United Nations’ Middle East peace envoy expressed ‘heartfelt condolences to the bereaved families, relatives and friends of those who died in the accident,’ in a post on Twitter.

Jabalia is one of eight refugee camps in Gaza, home to 2.3 million people and one of the world’s most densely populated areas.