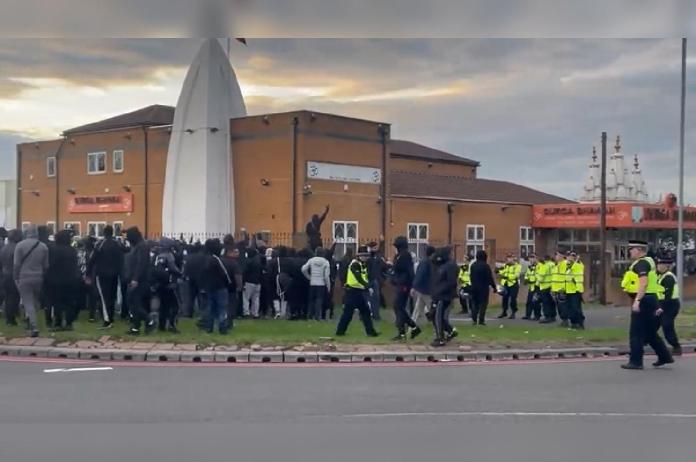 New Delhi: Around 200 individuals, purportedly from the Muslim community gathered in front of a Hindu Temple. They assembled in front of the Durga Bhawan Hindu Center to protest on Tuesday, September 20. The temple is located in the Smethwick area of West Midlands in England.

Social media users posted videos of a sizable gathering walking in the direction of the Durga Bhawan Hindu Center on Spon Lane. Many were heard shouting “Allahu Akbar” or similar phrases.

Chants of: “Takbir. Allah Akbar” can be heard.

Some are even climbing the walls in plain sight of law enforcement: pic.twitter.com/AXW7SfWGEs

Hindu and Muslim organizations clashed over the past weekend, which the police described as “severe disturbance” and “substantial aggressiveness” in the wake of the India-Pakistan Asia Cup cricket match that took place in Dubai at the end of August.

Arrests have been made

Following this, the Indian High Commission in London made a vehement statement denouncing the violence against the Indian community and requesting protection for those impacted.

For alleged involvement in the rioting in Leicester, 47 persons have been detained so far.

The leaders of the Hindu and Muslim communities met on the steps of a mosque in Leicester on Tuesday morning and released a joint statement calling for love, peace, and quiet. In addition, they demanded an end to “provocation and violence” right away.