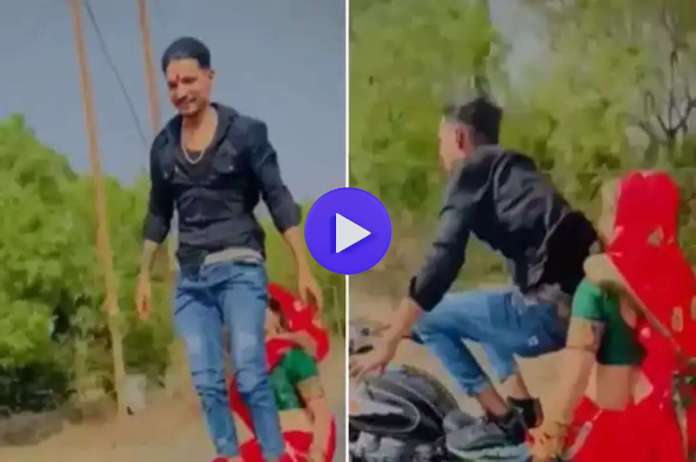 Hum to doobenge tumko bhi le doobenge… This is what many are saying after watching this viral video on social media. People are not only putting their own lives in risk when producing reels, but they are also endangering the lives of others. In the pursuit of likes and views, someone created a video that will make you tremble from the inside out. The man began performing stunts by forcing his wife sit on the bullet, which is pretty frightening.

A pair can be seen riding a Royal Enfield motorcycle in a video shared on the Instagram account ghantaa (Bullet). The woman in the red saree seated behind wears a ‘ghunghat’ on her head. Looking at her, it appears like she is connected to the country surroundings. The spouse, who is dressed in blue pants and a black shirt, is riding his bike.

The husband squats on the moving bike’s seat first, then removes hands off the handle and stands on the seat. During this, the woman sits like a stone on the back seat, clutching her pallu. She isn’t moving at all. If she had moved even little, the balance would have shifted and both of their lives would have been jeopardised.

Such folks reach hospital after accidents

After witnessing this video on Instagram, people were shook to their core. They are all reacting differently.

‘If it collapses, the relationship and the objective will separate,’ one person remarked. Other remarked, ‘What he is doing is terrible, but the good news is that his prisoner believes him completely.’

‘Such folks come to the hospital after having an accident,’ wrote another. Such folks have a lack of intelligence.’ ‘In this video, people must be viewing more ladies than boys,’ wrote one.

At the same time, other individuals are speaking of arresting the individual.

People do a lot of stupid things when it comes to likes and views. Things should be enjoyable rather than dangerous. Things are nice if you dance and have fun. However, such deadly acts have no right to go viral on social media. This might be fatal.