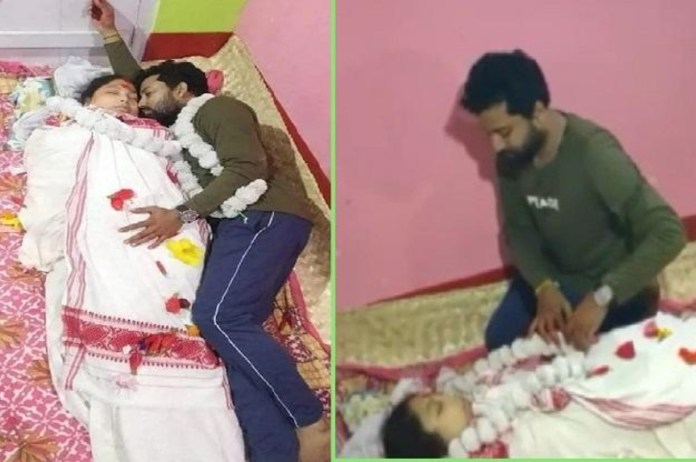 Assam: After the death of a girlfriend in ghost Assam, something happened that people are forced to say that there should be love. However, this love of the boy made everyone’s eyes moist.

In Assam’s Raha village, both Bitupan and Prarthana were deeply in love. Like every loving couple, they too had many dreams but fate had written something else. The boy’s girlfriend was suffering from a terminal illness.

WATCH: BIZARRE! THIS girl has a unique fetish of being treated like a dog

Preparations for the funeral were going on. Meanwhile, Bitupan demanded prayer in front of everyone. With tears in her eyes, he hugged the dead body. He cried seeing everyone present there.

Photos and videos of this moment is going viral on social media. People are turning emotional watching him cry along side Prarthna’s dead body.

Before the last rites, Bitupan made his request and dressed. After this, he lay down for a long time hugging the dead body of the prayer. Bitupan had so much love in his heart for Prarthana can be deduced from the fact that he even spoke of ’till death do us part’.