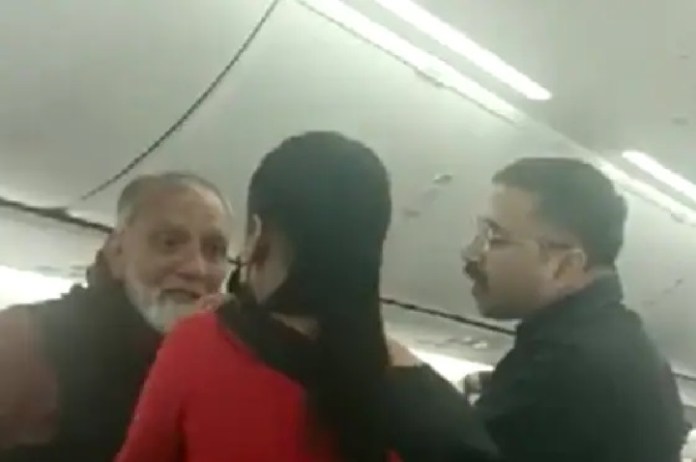 Delhi: A video is going viral on social media in which an elderly man passenger is seen behaving inappropriately with an air hostess on a Delhi-Hyderabad flight at the Delhi Airport.

In the video, a passenger could be seen arguing with the cabin crew on the SpiceJet flight. Fellow passengers intervened and tried to sort the matter out. The accused passenger on the Delhi-Hyderabad SpiceJet flight has been arrested after a complaint was filed by a SpiceJet security officer, Delhi Police said on Tuesday (January 24). According to the sources, Delhi Police registered a case under section 354A against the passenger. The 105 passengers, who were on the flight were later sent to another aircraft name ‘Air India Express’ which departed after 1 pm.

The passenger and & a co-passenger were deboarded and handed over to the security team at the airport pic.twitter.com/H090cPKjWV

Over the last few months, several cases of unruly behaviour by passengers onboard flights have emerged. Here are some case studies:-

An inebriated male passenger urinated on a 70-year-old female passenger on a New York-Delhi flight, after the investigation, the 34-year-old man has been banned by Air India for four months.

In another case of mid-flight incident, two men onboard a Biman Bangladesh Boeing 777 flight engaged in a physical brawl. In a video that surfaced on the social media platform, a young shirtless man could be seen engaging in a physical clash with a co-passenger who is seated on the flight.

On January 7, two foreign nationals were offloaded from a Mumbai-bound Go First flight from Goa after they allegedly misbehaved with a woman cabin crew member.