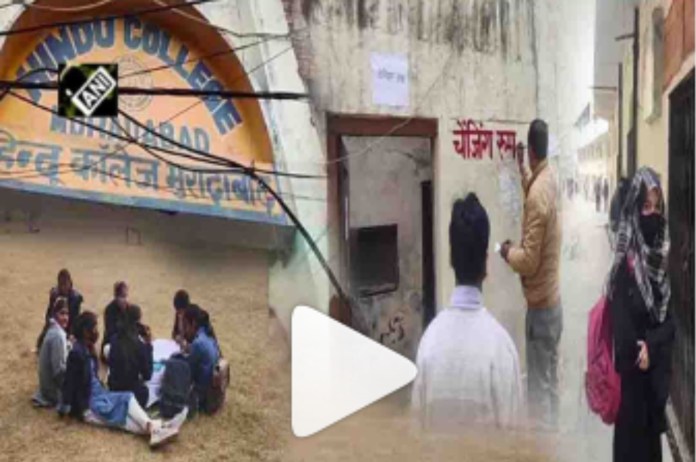 Muradabad: In Muradabad district of Uttar Pradesh, Hindu degree college barred the entry of girls wearing burqa inside the campus following which, the administration has set up a changing room outside college so the girls can remove their burqa there before entering.

A professor named Dr A.P. Sing said, “There have been many people visiting our college and because of them, girls used to feel uncomfortable so keeping that in mind, we have decided to keep a dress code so that we can identify them among the crowd.”

The professor mentioned that the decision was taken to manintain the dres code applied in the college already.

This comes after the Samajwadi Chatra Sabha objected that the administration asked the girls to remove their covers at the gate. “Keeping that in mind we have created this changing room,” added the professor.

While talking to mediaperson, one of the college students supported the decision of the administration of stopping girls to wear burqa inside. She said, “If they have asked to wear the dress then, why wear the burkha inside and come to the college. We support the decision of changing room.”

The incident reminds us of the most controversial situation which was taken place in Udupi college where Muslim girls were denied to entry the campus while wearing burkha and give exams. The Karnataka hight court upheld the ban on hijab by the educational institutes on 15th march 2022. The court ruled that hijab is not an essential religious practice under Islam.