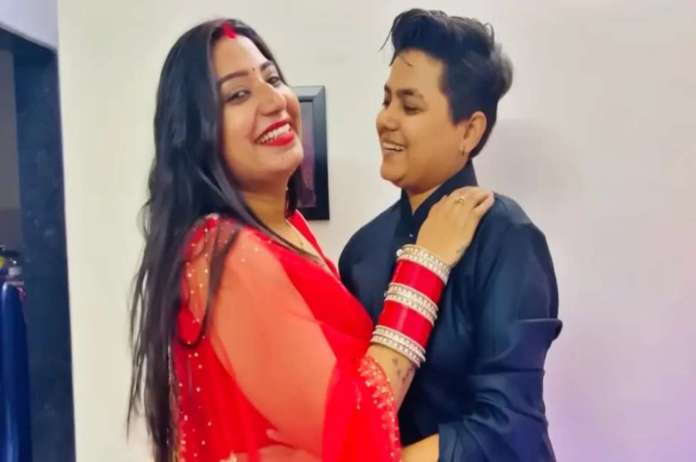 Payal and Yashvika, two girls, have married. This Indian lesbian couple’s love story has gone viral on social media. The couple claims that their relationship is as valid as any other. They must, however, continue to struggle with social acceptance.

Yashvika stated that she met Payal on Tiktok in 2017. After that, they began chatting on a daily basis. The conversation progressed from chat to call and then to video call. They eventually agreed to meet.

Yashvika claims that Payal stopped seeing her WhatsApp messages. Payal began to ignore him. Yashvika reacted angrily, saying, “Talk to me or block me.” Yashvika was then blocked by Payal. Payal realised her error after 6 months and contacted Yashvika on her behalf.

Payal jokes that she realised after six months that she would not be spending her life alone. They finally met in 2018 for the first time. They began dating after only a few days of meeting.

Payal previously worked in Ludhiana, while Yashvika previously worked in Nainital. In such a case, they used to travel to each other’s cities once a month to meet. This lasted about two years. When Corona arrived in 2020, they decided to live together in isolation. During this time, they also decided to tell their families about their relationship.

Payal’s family was quick to accept their relationship, but Yashvika had to work a little harder to persuade her parents. Yashvika claims that when she told her family about Payal, they advised her to marry a boy while keeping Payal in the picture. Then Yashvika clarified that she only wants to marry Payal.

They married in October 2022. The couple also started their own YouTube channel, where they began sharing daily life stories. He has posted videos on YouTube about everything from marriage to Karva Chauth celebrations. As their channel grew in popularity, the couple relocated from Ludhiana to Mumbai. Actually, the couple was concerned that there would be no problems.

Yashvika claims that some of her closest friends attended her wedding. At the wedding, Payal wore a sherwani, while Yashvika wore a lehenga. Their marriage took place in accordance with Hindu traditions. Although this marriage is not yet recognised in India, the couple hopes that it will be recognised soon and that society will accept them as well. People, according to Yashvika and Payal, should respect our emotions.