Old bill: Find out at what price people used to pay for Masala Dosa, coffee in 1971? 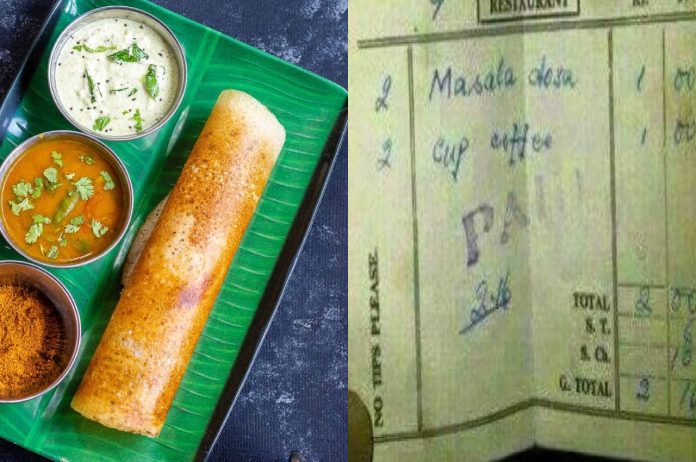 New Delhi: A bill from Delhi restaurant Moti Mahal is going viral on social media because it says that the person has only paid 2.16 rupees. This old bill from 1971 includes 2 Masala Dosa and 2 coffee.

This bill of Masala Dosa and coffee has been shared on Twitter by an account named @indianhistory00 and the users are giving different reactions to this. This post was shared on February 1, 2017, seeing which everyone was shocked.

In this bill, the Masala Dosa only cost Rs. 1, while the coffee cost only Rs. 1. After adding these two things, the total bill becomes Rs 2. The special thing about this bill is that the owner of the restaurant has added the service tax of 6 paise and a service charge of 10 paise.

Dosa is an important part of South Indian food, it is preferred to eat more in the South area. Apart from this, dishes like idli vada-uttapam are also famous in that part of India. If we talk about the rate of dosa in today’s era, then you will find dosa everywhere and it will cost around Rs 50 to Rs 200.