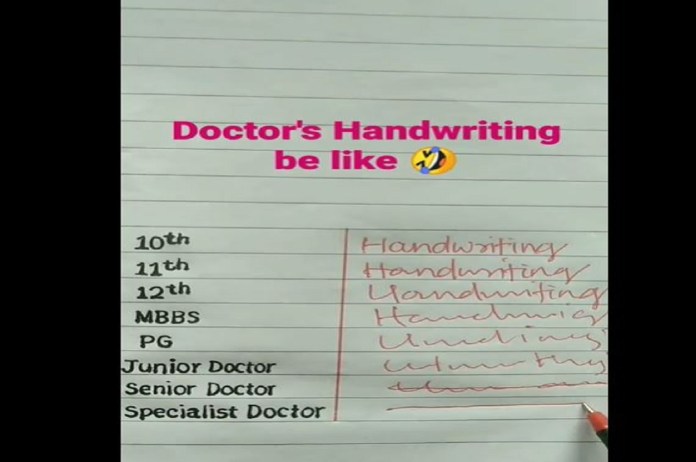 New Delhi: We have always tried to understand what is written on the doctor’s prescription sheet but every other attempt is either a hit or miss. We have grown up wondering about the names written on it, however at the end nothing makes sense and we just surrender.

Industrialist Anand Mahindra, who is known for his witty tweets, has again intrigued his followers by sharing a 15-seconds video which shows how the handwriting of a doctor is inversely proportional to his studies.

The video shows how the good handwriting of the school going student gets worse with the admission in MBBS, when he becomes a doctor after doing MBBS, and then reading his handwriting is no longer a matter of any ordinary person.

It even becomes difficult to recognize any word from the handwriting of a specialist doctor doing PG.

A comment by a user read, “Yea cos we have to write so many prescriptions with an OPD of 100 plus in 7 hrs … today we dictate and print in urban india .. with acute shortage of doctors in india this won’t solve .. in the near future.”

“It would be like shorthand used in secretarial assistance! After taking notes, even the secretary will have trouble deciphering it,” commented another user.

The tweet posted 5 hours ago has by now over seven lakh views with over 30K likes and over 4000 re-tweets.

Another user’s comment read, “Sorry sir, we do not find it funny. This transformation, every doctor fears, results from work pressures and responsibility at each stage with new gen pen-pushers adding to clinicians woes by ushering in mountains of paperwork to justify their own salaries and existence.