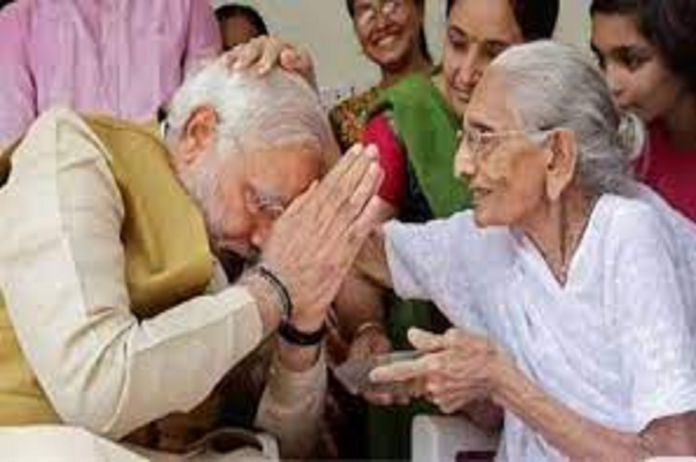 In his heart touching note, PM Modi wrote: “Splendour century rests at the feet of the God. I have always felt the trinity I ‘Maa’, which possesses the journey of an ascetic, the symbol of a selfless Karmayogi and a life committed to values.”

The Prime Minister went on to say in his another tweet, “When I met her on her 100th birthday, she said one thing, which is always remembered that is work with intelligence, live life with purity.”

Due to health problems, Heeraben (100) was hospitalised to the UN Mehta Institute of Cardiology and Research Centre on Wednesday morning. On Thursday, hospital officials stated that her condition was improving.

The Gujarat Chief Minister’s Office (CMO) also said in a statement that Heeraben would be released soon.

Earlier on Thursday, members of the ‘Dharmayatra Mahasangh’ in Gujarat’s Vadodara offered prayers at the temple and chanted the ‘Maha Mrityunjaya Mantra’ for PM Modi’s mother’s health. Earlier in the day, the Shri Badrinath-Kedarnath temple committee prayed for Heeraben’s quick recovery.

Meanwhile, PM Modi has left for Ahmedabad, where he will flag off the Vande Bharat train in Howrah, Kolkata, as well as other railway development projects and a meeting of the National Ganga Council, as planned. According to sources, Prime Minister Modi may attend via video conference.

Following his mother’s untimely death, PM Modi travelled to Ahmedabad, where his mother was being treated. Initially, he was expected to flag off the Vande Bharat train in Howrah, Kolkata, and other railway development projects as part of Namami Gange in West Bengal. According to sources, he will now do it via video conference.