Watch: Why this VIDEO of Eng vs Aus match making rounds on social media 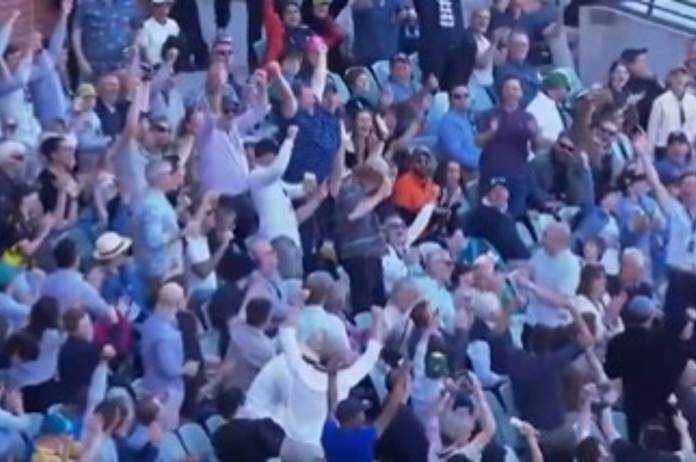 AUS vs ENG: Interesting views emerge from the cricket ground which always stun audience. A similar scene came to the fore in the first ODI between Australia and England at the Adelaide Oval on Thursday. Coming out to bat first, David Malan hit a blistering century on behalf of the English team. He hit many huge sixes in his innings scoring 134 runs in 124 balls hitting 12 fours and 4 sixes. During the match, an interesting incident happened a video of which is making rounds on social media.

The catch that stunned the spectators

This scene was seen in the 42nd over. As soon as Ashton Agar bowled the second ball of this over, Malan flew it towards deep cover point while standing at the crease. This six hung in the air for a long time, as soon as the ball came down, there was a stir in the audience. Some of the spectators were drinking beer. In such a situation, as soon as he saw the ball coming, he put down his glass and caught the catch with one hand. Finally, when the ball was thrown towards the fielder, the spectator raised the glass again and took a sip. This whole scene got recorded in the camera.

All went in vain

However, Malan’s innings went in vain and World Champion England lost their first ODI. England batting first scored 287 runs in 50 overs. Chasing the target, the Australian team won the match by 6 wickets with 19 balls to spare. David Warner scored 86, Travis Head scored 69, Steve Smith scored an unbeaten 80 and Cameron Green scored 20 to give Australia victory. Alex Carey scored 21 and Marnus Labushen scored 4 runs. The second match of the series will be played at SCG on 19 November.