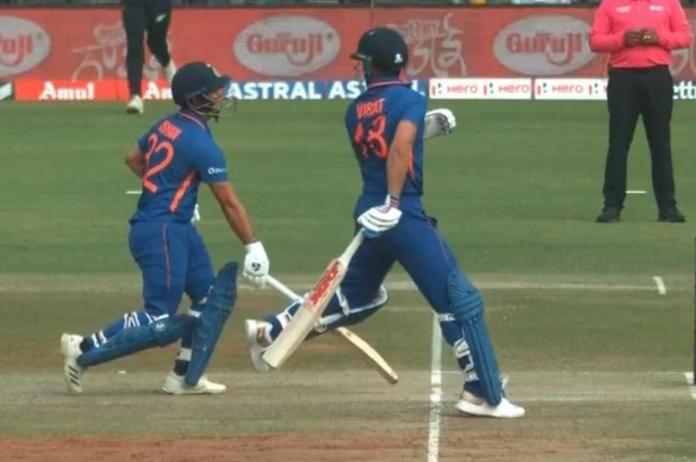 New Delhi: Indian batter Ishan Kishan and Virat Kohli were involved in the terrible mix-up against New Zealand on Tuesday at Holkar Stadium in Indore, Madhya Pradesh. India and New Zealand are playing their third and final One Day International (ODI).

After opener Rohit Sharma and Shubman Gill made strong start and shared the 212 runs partnership stand. Ishan also tried to continued the runs flow that was set by the openers.

Ishan Kishan looked interested in making the attempt for a run but gave up on the middle of the pitch. Virat who reached the other end of the pitch, does not know that Ishan had changed his mind but Ishan returned back and sacrificed his wicket, and Virat survived.

The incident took place in the 35th over of the first innings, with Ishan Kishan was facing  Jacob Duffy. The left-hand batter played the ball in the cover direction for a quick single. But the situation got worse when the both batter involved in the yes-no confusion.

Kohli was sure for the quick-single, but mind keeps diverting. In the end, both batter ended on the same side of the crease. Virat Kohli reached earlier then the Ishan, and goes back to the pavilion.

Ishan looked reluctant to return back to the crease, probably sacrifice his wicket for the Virat Kohli.

He first said Yes, Virat Kohli responded him so well, but in the end Ishan Kishan pays the price for his mistake!
#INDvNZ pic.twitter.com/59IFpDBjzD

India started with the terrific knock from both the opener Rohit Sharma and Shubman Gill, both scored hundred. After that Hardik Pandya played the 54 runs knock and built up the partnership with Shardul Thakur.