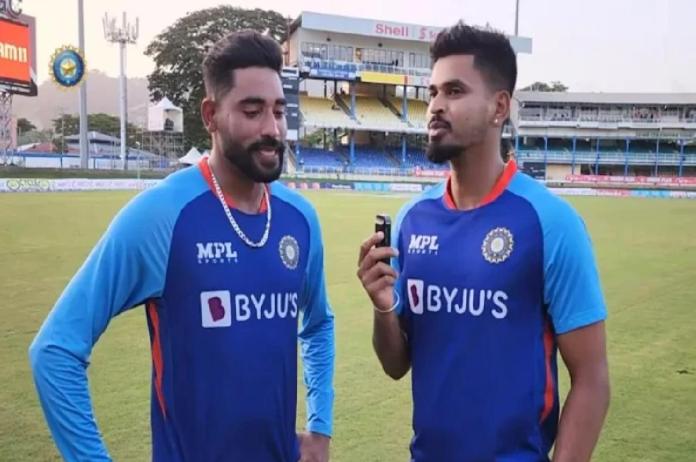 New Delhi: International Cricket Council (ICC) on Tuesday, January 24, released the One Day International (ODI), team of the year. Two Indian got their name placed on the star-studded list.

The ICC team that is lead by the Pakistan skipper Babar Azam, consists two Indian among the 11 players. Indian batter Shreyas Iyer and speedster Mohammed Siraj are only India who could make to the list. In the list are two New Zealand players, two Windies stars, two Australians and one each from Zimbabwe, Pakistan and Bangladesh.

Does your favourite player make the XI? #ICCAwards | Details 👇

Playing XI of the team

1.Babar Azam (C) – Pakistan: Pakistan captain Babar Azam once again showed his prowess in the 50-over format, displaying once again why he has ruled the roost at the top of the MRF Tyres ICC Men’s ODI Player Rankings since July 2021.

The 28-year-old registered eight scores of more than fifty, three of which he converted into hundreds. He finished the year with 679 runs at a stunning average of 84.87.

2. Travis Head – Australia: Head brilliantly reinvented himself as an opener in ODIs, becoming one of Australia’s most consistent batters in the format. It was a year to remember for Head – who became one of the first names on the Australian team sheet – notching up 550 runs from nine games at 68.75.

3. Shai Hope – West Indies: Hope did not get off to the greatest of starts in 2022 but in typical fashion started to grind out runs in the latter half. He finished the year with 709 runs, which include three hundreds and two fifties, at an average of 35.45.

4. Shreyas Iyer – India: Shreyas Iyer emerged from 2022 as one of India’s most consistent batters in the 50-over format while also become the anchor of their middle-order.

Mostly slotting in at No.4, Iyer played 17 games during the calendar year and scored 724 runs at an average of 55.69. His scored his runs at a brisk pace of 91.52, which included one century and six fifties.

5. Tom Latham (wk) – New Zealand: Often regarded as a solid batter, Tom Latham added a new dimension to his game in 2022, often playing the role of a finisher from the No.5 position.

Latham scored 558 runs from 15 matches at an average of 55.80 and a sizzling strike-rate of 101.27. He notched up two fifties and two centuries in the year becoming a vital cog of the New Zealand middle-order.

6. Sikandar Raza – Zimbabwe: 2022 witnessed the resurgence of Zimbabwe on the international scene and a lot of it was down to one man – Sikandar Raza. Raza aggregated 645 runs at an average of 49.61 and strike rate of 87.16, making two fifties to complement three centuries.

With ball in hand, Raza was ever-reliable, scalping eight wickets while giving away just more than five an over.

With his bowling as effective as ever, Miraz developed his batting further, often bailing Bangladesh out of some tough situations.

8. Alzarri Joseph – West Indies: Joseph developed from a highly-rated prospect to a reliable performance with the ball for the West Indies in the year 2022. Not lacking in pace but sometimes in accuracy, Joseph worked on his shortcomings and became a fearsome prospect for the batters to face.

9. Mohammed Siraj – India: Mohammed Siraj’s skillset in white-ball cricket, especially the 50-over format developed in leaps and bounds in 2022. With Jasprit Bumrah often missing due to injury, Siraj emerged as the most potent weapon of the India pace unit.

10. Trent Boult – New Zealand: The left-arm pacer has been a beacon of consistency for almost a decade and the year 2022 was no different. Batters again struggled to counter his swing with the new ball, while finding it troubling to face him due to his skills in the middle and death overs.

11. Adam Zampa – Australia: Adam Zampa continued to show why he has been such a vital cog in the Australian white-ball setup, finishing the year as the highest wicket-taker for his country in ODI cricket.

The leggie enjoyed his joint-most prolific year in ODI cricket, matching his tally of 30 wickets from his debut year in 2016. His feat was even more impressive this year considering nine of the 12 matches he played were at home, where conditions aren’t favourable for spinners.