Goodbye actress Rashmika Mandanna shares a stunning photo on her Instagram handle. In which, she look captivating. 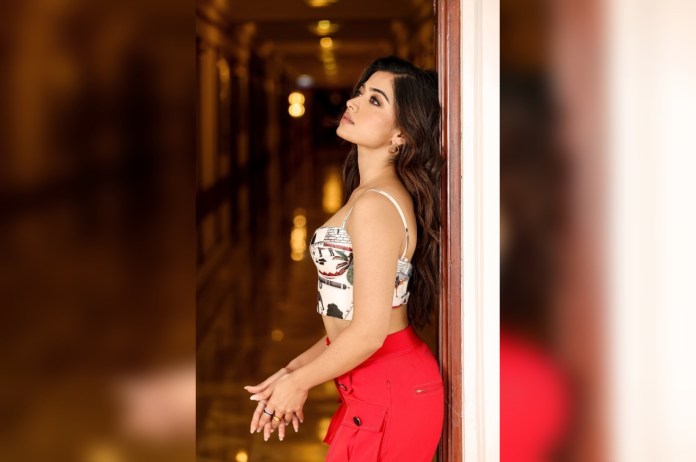 New Delhi: Rashmika Mandanna is one of the top actresses in Tollywood. Now, she is ready to make her Bollywood debut with the film ‘GoodBye’ opposite Bollywood’s two veteran actors Amitabh Bachchan and Neena Gupta. She also becomes a ‘National Crush’ for her cute smile and beauty.

The actress recently shared a photo of herself on her Instagram handle. In the photo, she donned a white corset top with ethnic motifs paired with red high-waisted trousers. The actress captioned the photo with, ”GoodBye.”

Rashmika completed her look with a pair of golden hoop earrings and kept her hair loose. She also opted for light brown makeup. However, the Geetha Govindam actress looks enchanting as she gives a candid pose.

Earlier, the trailer of the film ‘GoodBye’ has been released by the makers, and it looks quite promising. The film is a rollercoaster ride of emotions. The film also stars Elli AvrRam, Sunil Grover, Sahil Mehta, and Abhishek Khan in pivotal roles. It is produced by Ektaa R Kapoor’s Balaji Motion Pictures in association with Good Co. Helmed by Vikas Bahl. The film will make its theatrical release on October 7, 2022.

She will also feature in Shantanu Bagchi’s Mission Majnu alongside Sidharth Malhotra in lead. She also has Sandeep Reddy Vanga’s Animal opposite Ranbir Kapoor, which will release on August 11, 2023. The film is produced by Bhushan Kumar & Krishan Kumar’s T-Series, Murad Khetani’s Cine1 Studios, and Pranay Reddy Vanga’s Bhadrakali Pictures.

Talking about her Tollywood projects, the actress will see in the Tamil film, Varisu with Thalapathy Vijay, which will release in January 2023. She also has the sequel of ‘Pushpa.’