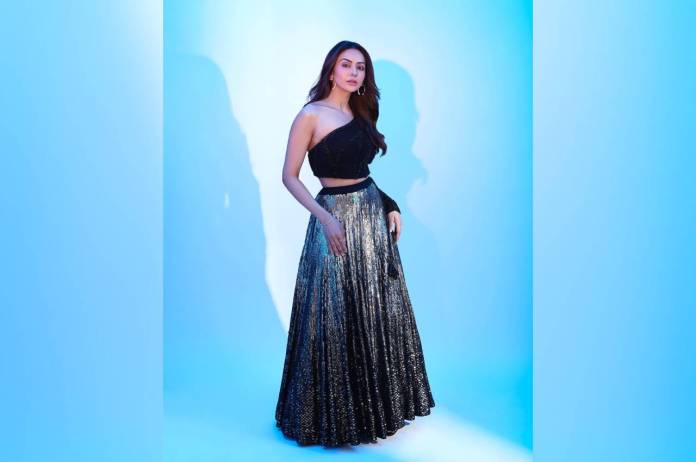 New Delhi: Bollywood actress Rakul Preet Singh is a true fashionista and her Instagram photos are proof that she can pull off any outfit easily. The actress recently shared a series of photos in which she looks ravishing.

For the latest photoshoot, Rakul donned a grey lehenga paired with a black off-shoulder blouse. She completed her look with round earrings and kept her hair loose. Talking about her makeup, she kept it simple with pink lipstick and nude eye makeup.

While sharing the photos, she captioned them with, “Just Black and bling things.”

Soon the photos went viral on social media. Fans started dropping their comments. A user wrote, “Rakul preet looking drop dead gorgeous uff why so hot.” Another wrote, “u r a most beautiful angel in the earth. u r looking hot n cute like an angel.” The third user wrote, “Its just perfect.”

The actress recently turned 32 on October 10. She celebrated the day with the film producer and her boyfriend Jackky Bhagnani, Malaika Arora, Arjun Kapoor, Bhumi Pednekar, their friend Orhan Awatramani and others.

Rakul also shared glimpses from her birthday on social media. For the occasion, she donned a black and white dress with black boots. The actress captioned her birthday post, “What’s a birthday without mouthful of cake?”

Rakul Preet made her Bollywood debut with Yaariyan in 2014. She was also well-known for Telugu and Tamil films. She has also appeared in films like De De Pyaar De, Runway 34, and Attack among others. The actress and Jackky made their relationship public in October 2021.

Rakul’s next film Doctor G been released in theatres on October 14. In the film, she essays the character of Dr Fatima Siddiqui alongside Ayushmann Khurrana who plays Dr Uday Gupta.