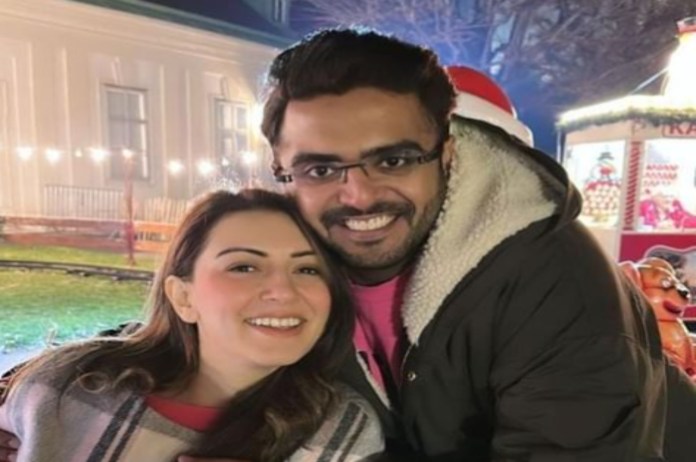 New Delhi: Having just tied the knot, Hansika Motwani and Sohael Khaturiya are now spending the holidays in Vienna, Austria. The couple is cosily enjoying themselves as they joyfully and gleefully experience Christmas delight. It would be rude to overlook the actress’s latest release, a picture of her and her spouse on vacation. While posing together, the duo was spotted flashing their wide, cheery smiles.

A cute photo of Hansika and Sohael together from their holiday was taken. The picture shows the adoring husband holding his wife as they posed for a picture that would look great on a wall. He chose a comfortable black jacket rather than Hansika’s striped black and white sweater.

On her Instagram account, the actress also posted pictures of a Christmas tree and brightly lit streets. It appears that the couple is enjoying their time together. The couple is celebrating their first Christmas and New Year together as a married couple. We can therefore perceive the affection, and it is certainly wonderful. 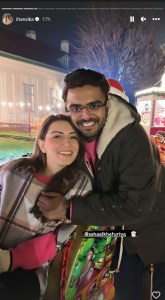 Recently, the newlywed uploaded a new batch of photos from her haldi, mehendi, and wedding to her Instagram account. In a traditional red lehenga, Kundan jewellery, and high-glam makeup, she was a stunning bride. The stunning woman just posted a behind-the-scenes Instagram video of her wedding preparations.

On December 4th of this year, Hansika Motwani and Sohael Khaturiya were wed in a lavish Sindhi ceremony in Jaipur. Even as the big day approached, the couple garnered media attention at pre-marriage rituals including Mata Ki Chowki, Mehendi, Haldi, Sangeet, and Sufi night.

Recall that Hansika Motwani and Sohael Khaturiya underwent a long journey from being business partners to becoming best friends and then falling in love. At the famous Eiffel Tower, the businessman and the actress began their happily ever after.