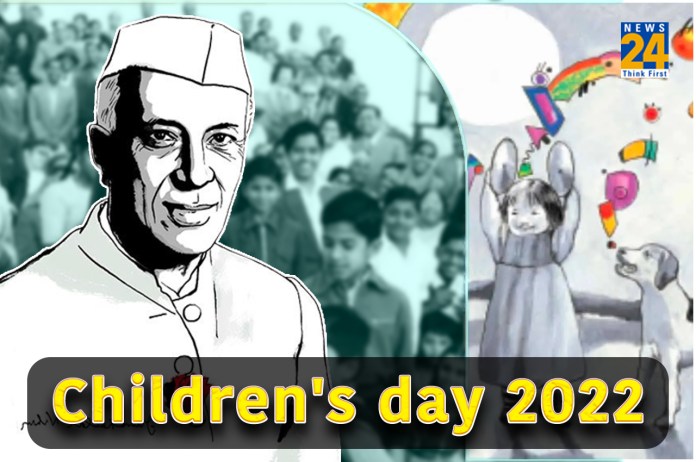 Children’s Day 2022: Children’s Day is celebrated in India on November 14, 2022. On this day, people celebrate the birth anniversary of Pandit Jawahar Lal Nehru, who was one of the greatest leaders and the first Prime Minister of India. This day is popularly known as Bal Diwas.

One of the greatest leaders and the first Prime Minister of India, Pt. Jawaharlal Nehru was born on November 14, 1889. He loves roses and used to love children a lot. He believed that every child is the future of this country and if they are educated and treated well can create these wonders.

His bold vision even paved the path for greater housing and educational options for children across all age groups, genders, and Indian states. In one of his famous speeches, he quoted, “The children of today will be the India of tomorrow. The way we bring them up will determine the future of the country.”

Pt. Jawaharlal Nehru passed away in 1964, and the parliament issued a resolution in his memory designating his birthday as Children’s Day’s official date. Earlier, India used to celebrate this day on November 20 as in 1954, the United Nations announced that day as Universal Children’s Day. Now, in India, Children’s Day is celebrated to commemorate the birth anniversary of the first Prime Minister of India.

Here are some impressive facts about Pandit Jawahar Lal Nehru:

1. Between 1950 and 1955, Jawaharlal Nehru was nominated for the Nobel Prize 11 times, largely for his work in peace, but he was never successful in winning the award.

2. In October 1907, Pandit Jawaharlal Nehru enrolled at Trinity College in Cambridge, where he later earned an honours degree in natural science in 1910.

3. Following his return to India in August 1912, Nehru attempted to establish himself as a barrister by enrolling as an advocate with the Allahabad High Court.

4. Nehru was from a Pandit family in Kashmir.

6. After becoming Congress President in 1929, Nehru played a crucial role in the ongoing battle for independence that Congress has been leading.

7. He authored his autobiography while incarcerated in 1935. “Toward Freedom,” a book written by Nehru, was released in the United States in 1936.

8. On May 27, 1964, Pandit Nehru passed away after a massive heart attack. An estimated 1.5 million spectators turned out to witness his cremation.

9. Pandit Jawaharlal Nehru spent nine different times in prison while India was fighting for Independence. In total, the British imprisoned Nehru for 3259 days, which equates to 9 years of his life.

Also Read :- Stress Relieve Food: Here are 5 items for you to add to your diet

10. He joined Annie Beasant’s 1916-founded Home Rule League out of tremendous admiration and support for the activist.

11. In 1927, he was the first to propose Complete National Independence and to forego all ties binding Indians to the British Empire, including the Indian Civil Service (ICS).

13. On December 31, 1929, in front of sizable crowds of onlookers and Congress workers, Nehru raised the Indian Flag in Lahore. The tricolour flag from there gained popularity reached the general public and was flown at meetings and protests.