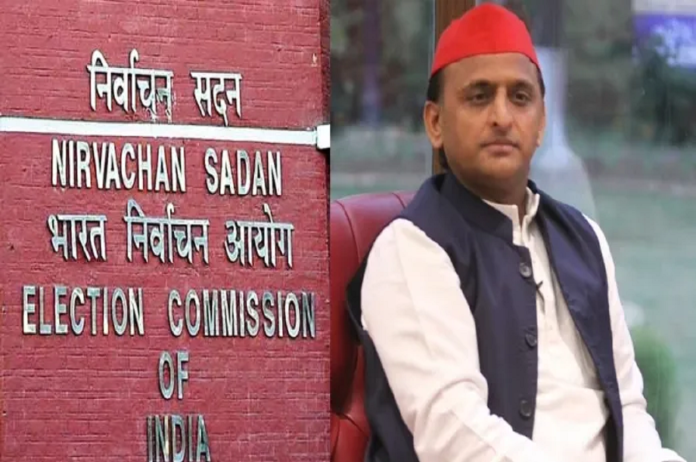 New Delhi: The Election Commission on Thursday issued notice to Samajwadi Party leader Akhilesh Yadav, asking to submit the proof to substantiate his allegation that each of Uttar Pradesh’s 403 constituencies had around 20,000 Yadav and Muslim voters removed from the electoral records.

Election Commission asks SP chief Akhilesh Yadav to submit proof to substantiate his allegation made at public fora that ECI deliberately deleted names of voters from Yadav& Muslim communities to tune of 20,000 in almost all UP Assembly constituencies, at BJP's behest

Akhilesh Yadav, the leader of the Samajwadi party, accused the Election Commission of rigging the Uttar Pradesh electoral about a month ago. On Thursday (October 27), the election body issued him a notice asking  “documentary proof” to back up his claims. Prior to the election in Uttar Pradesh earlier this year, Yadav said that the election authority had purposefully erased the names of over 20,000 voters from the Yadav and Muslim communities.

On September 29, the EC took notice of media reports on Akhilesh’s allegation and requested that he provide documentary evidence to support it. Akhilesh claimed that the BJP ordered the removal of the electors’ names from the voter rolls.

According to an EC source, there is no legal provision for a caste- or religion-based election roll.

The EC source further said, “Since Akhilesh’s statement regarding alleged mass deletion of names, that too of a particular group of voters from the electoral roll, is extremely serious and has far-reaching substantive and perceptional implications on the integrity of elections and thereby on democracy, the ECI has asked him to submit documentary proof based on which he has made such a public statement about mass deletions,”

According to the source, the EC has requested Akhilesh to respond by November 10 “so that required action can be taken.” The previous chief minister of Uttar Pradesh was asked to present supporting documentation along with information on deletions broken down by Assembly. According to the EC source, the commission had not received any complaints of this nature, nor had any similar problems arisen during the earlier this year’s elections for the Uttar Pradesh Assembly. According to the source, neither during the ongoing review of the rolls since that time nor during the special summary revision of the electoral roll from November 1, 2021, to January 5, 2022, had there been any claims of names being deleted.