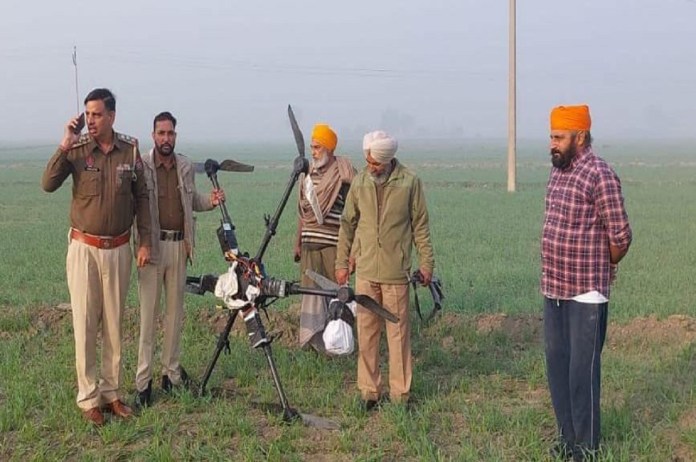 New Delhi: Punjab Police, in a joint operation with the Border Security Force (BSF), have found a drone in a field near the India-Pakistan border in state’s Tarn Taran district with over 5 kg of heroin.

In a tweet on Friday, the Punjab director general of police (DGP) wrote, “@TarnTaranPolice in a joint search operation with @BSF_India have recovered a Hexacopter drone equipped with modern technology & packets containing #Heroin weighing 5 Kgs from fields near the Indo-Pak border.”

.@TarnTaranPolice in a joint search operation with @BSF_India have recovered a Hexacopter drone equipped with modern technology & packets containing #Heroin weighing 5Kgs from fields near the Indo-Pak border. (1/2) pic.twitter.com/wgCkFEHfSm

Director General of Police Gaurav Yadav said police immediately shared the pin-pointed inputs with the BSF after noticing the drone movement in the Indo-Pak border on the intervening night of Thursday and Friday, as reported by news agency PTI.

Preliminary investigation suggests that the drone was found to be having a modern technology and it could lift a good amount of weight.

Senior Superintendent of Police Sukhminder Singh Mann said investigations are on to trace those who were to receive this air-dropped consignment of heroin.

On Monday (November 28), BSF shot down two Pakistani drones along the India-Pakistan border in Amritsar and Tarn Taran districts. The two hexacopters were carrying around 10 kg of heroin, which were recovered by the troops.

The Punjab DGP, in another tweet, informed that Tarn Taran Police along with BSF has downed three trans-border rogue drones in the last one week and recovered 12 kgs of Heroin.