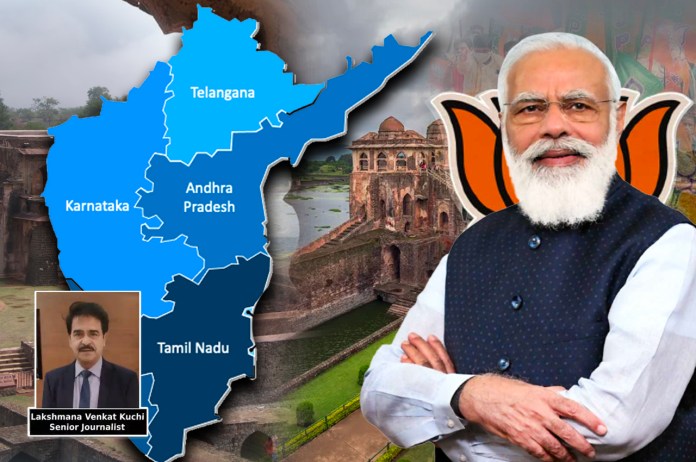 The BJP’s by now what have become standard operating procedures to conquer new territories are in place for gaining ground in its virgin areas – South India minus Karnataka, that is already its gateway to the region that sends 130 MPs to Lok Sabha. The BJP is making a serious play to take on regional parties for winning power in the respective state assemblies as well.

The BJP’s South plan appears akin to its West Bengal push – with high visible and high voltage media and campaign blitzkrieg led by Prime Minister Narendra Modi and the entire team of Union ministers and key party leaders, attack the regional party leading the government for corruption and charge it being a family concern and poach influential members from the regional party to weaken it.

Prime Minister Narendra Modi undertook a two-day whirlwind tour of Karnataka, Tamil Nadu, Telangana and Andhra Pradesh, which together send over 100 Lok Sabha MPs, over November 11 and 12, inaugurating projects and promising development and infrastructure projects worth thousands of crores of Rupees in these states, preparing the ground for a propaganda onslaught by the local BJP leaders on how the Modi government was giving development a strong push in these states and how these states would gain from a ‘double engine’ government.

Political analysts see the use of central government agencies in BJP’s aggressive political push as its common strategy to weaken the party under its radar, say even Congress to lure and wean away members so as to create an impression of being a weakening party and build a perception that the BJP was the party of choice, of the regional leaders as well as of the people going by the mass rallies and a changing mood of the people.

While Karnataka will be having assembly elections early next year, Telangana and Andhra Pradesh too would be close to general elections for state assemblies. Already, the BJP has had mounted a massive campaign in Telangana, most recently with its strong but unsuccessful bid for Munugode assembly by poll and has become a serious challenger to the ruling dispensation. In Andhra Pradesh, for the first time, the Modi government has given signals of treating the Jaganmohan Reddy government, which has been its strongest ally inside and outside the parliament, as its political enemy.

For the present, the BJP is trying to build its party in the two Telugu-speaking states, by poaching from Congress and regional parties, wooing film stars and celebrities, and making allegations of mega corruption by the “family political concerns”. The central agencies too have had some activity going in these two states, legitimate though, but the timing of the incidents is suspect in the eyes of political analysts.

In Andhra Pradesh, Prime Minister’s meeting with a film-star turned politician Pawan Kalyan the other day is said to be a part of the plan to strengthen tie up with this political outfit. The top BJP leader are also in touch with mega film stars of Telugu movie world. Speculations are also rife that the BJP could be trying to attract ruling YSRCP MLAs into the party fold in Andhra Pradesh.

On his last week’s visit to south India, in Tamil Nadu, PM Modi preferred to address meetings in in English as against using Hindi in neighbouring poll-bound Karnataka, indicating the importance he gives to the state, that witnesses anti-Hindi imposition sentiments. The PM appears not to add to these sentiments at a time when the BJP is making a concerted pitch to enter the state. For the present, through alliances.

Incidentally, in all these states, the governors have also become a tad more active, and often are seemingly at odds with the elected governments – in Tamil Nadu, Telangana and even Kerala. Like in West Bengal, the state chief minister had to contend with an aggressive governor in Jagdeep Dhankar before he was elevated as the Vice President of India. Many of her party colleagues, alleged to have been involved in corruption scandals, are facing action by Enforcement Directorate. Nothing wrong in that, but an apparent inaction against the former TMC leaders joining the BJP, is what makes the opposition charges gain credibility among the masses.

It is perhaps for this reason that the BJP’s mega plan to capture West Bengal assembly, following its credible winning of 19 Lok Sabha seats in 2019 Lok Sabha elections, came a cropper.

In West Bengal, Chief Minister and TMC supremo Mamata Banerjee fought of the entire might of the BJP and the central government in the 2021n assembly elections. She is also apparently sharing her insights, and tips with leaders like K Chandrashekar Rao of Telangana and MK Stalin of Tamil Nadu, both of whom she met recently on different occasions.