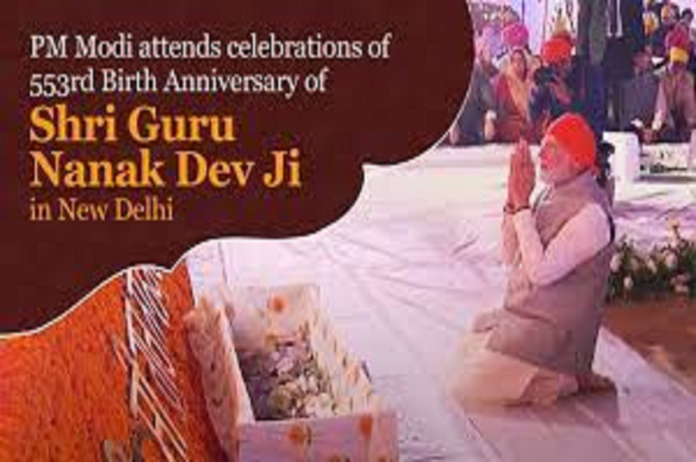 New Delhi: On the eve of Guru Nanak Jayanti, Prime Minister Narendra Modi attended the 553rd birth anniversary celebration of Guru Nanak on Monday at the residence of Iqbal Singh Lalpura, chairperson of the National Commission for Minorities.

PM Modi offered prayers to Guru Nanak Dev and spoke to the crowd on the occasion. Meanwhile, on the eve of Guru Nanak Dev’s birthday, India’s Vice President, Jagdeep Dhankhar, addressed the nation. “I convey my hearty greetings and good wishes to the people of our country and those living abroad on the auspicious occasion of Guru Nanak Dev ji’s birth anniversary,” the Prime Minister said in his speech.

On the eve of Guru Nanak Jayanti, PM Modi will participate in 553rd Birth Anniversary celebration of Sri Guru Nanak Dev ji in Delhi today evening. The celebration is taking place at the residence of Iqbal Singh Lalpura,Chairperson of National Commission for Minorities

“Our country has been blessed to have received spiritual and moral guidance from great teachers like Guru Nanak Dev ji, who evoked mankind’s inherent unity bound by the universal virtues of truth, kindness, and righteousness,” he said.

According to the Prime Minister, “With the sagely wisdom of preceptors and masters such as Guru Nanak Dev ji, India earned the esteemed status of Vishwaguru. He paved the way for a compassionate, virtuous life and a welcoming society. The pantheon of his Shabads and Sakhis represents humanity’s timeless spiritual heritage. May Guru Nanak Dev’s eternal message lead us to a more kind, compassionate, and peaceful world.”