Peace in Jammu and Kashmir on priority of Modi govt: Ramdas Athawale 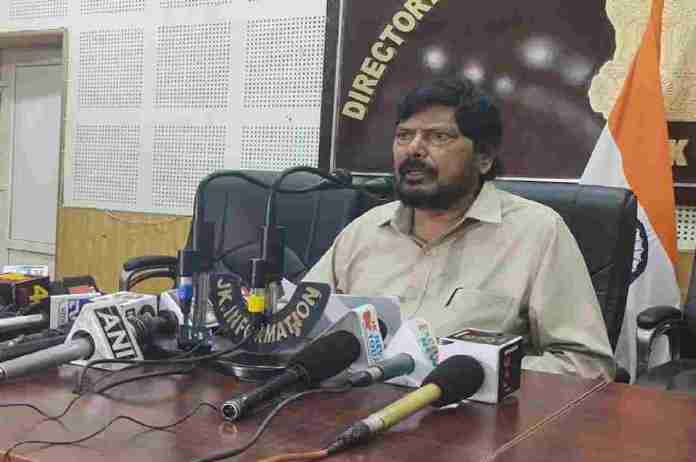 Srinagar: Union Minister Ramdas Athawale Friday asserted the development and peace in Jammu and Kashmir is on priority of Narendra Modi-led central government citing increase in tourism and investment.

Ramdas Athawale said that the peaceful atmosphere, which is now prevalent in Jammu and Kashmir under the present government, has been able to attract lakhs of tourists which is a positive sign and will create job opportunities for the youth of J&K besides infrastructure development in the tourism sector.

Athawale said that the government wants to create more employment opportunities for the youth of J&K by attracting private sector investment.

Many private sector investors have come to Jammu and Kashmir and will invest thousands of crores of rupees for the welfare of the Union Territory, the minister added.

Saying that J&K is and was the integral part of India, Athawale said that it is in the interest of Pakistan to improve relations with India for peace to prevail and for its own development.

Ramdas Athawale said that from last many years, the gates of development have opened for J&K which is evident from the fact that all the centrally sponsored schemes and programmes like Pradhan Mantri Awas Yojana, Jan Dhan Yojana, MUDRA, PM Ujjwala Yojana, Scholarship Schemes for Students, Welfare Schemes for Scheduled Castes, Scheduled Tribes and Other Backward Classes are now implemented in J&K.

Athawale further said that hundred percent implementation of many central schemes in J&K is witness to the fact that Govt. of India is steadfast to provide social stability at all fronts be that housing, livelihood etc. to the people of J&K.