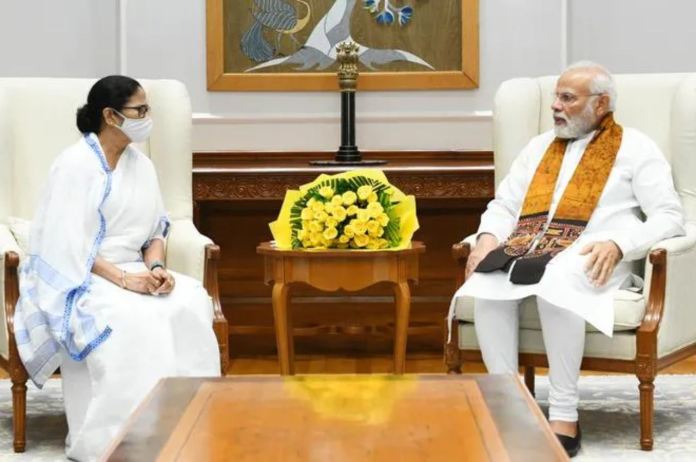 New Delhi: Prime Minister Narendra Modi and Chief Minister of Bengal Mamata Banerjee are meeting in Delhi. various topics, including the Goods and Services Tax payments that her government has long demanded, are likely to come up during the conversation. Bengal has frequently accused the BJP-controlled Center with holding up payments of GST owed to states, particularly those governed by the opposition.

Amit Mitra, the chief advisor to the chief minister of West Bengal, said that the Center has not paid integrated dues to the states totaling 27,000 crore in June.

The meeting, which took place just days after the Enforcement Directorate detained Partha Chatterjee, has, nevertheless, generated a lot of rumours. The minister was considered to be a close confidant of Mamata Banerjee and was detained after large amounts of cash were discovered at the home of his assistant Arpita Mukherjee.

The meeting has become a subject of contention in Bengal between the BJP and the in power Trinamol Congress. Dilip Ghosh, a state-level BJP politician, has been called into custody by the Trinamool for making what they deemed to be disrespectful remarks about Ms. Banerjee and her family.

The chief minister will be present at a Niti Aayog meeting on August 7 that will be presided over by PM Modi. At the meeting of the governing council, topics pertaining to agriculture, health, and the economy will be covered.

Banerjee had missed the council meeting the previous year. She is likely to bring up federalism issues and the non-payment of GST dues at this year’s gathering.