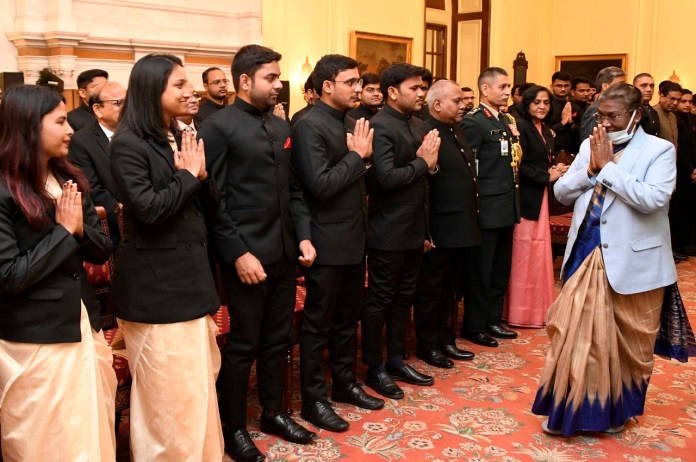 The president said this will help in a more efficient design and reduced time frame for construction.

Officer Trainees of Military Engineer Services called on President Droupadi Murmu at Rashtrapati Bhavan. The President urged them to make use of cutting-edge technologies such as machine learning and artificial intelligence in their future projects. https://t.co/5TpwUZH5F6 pic.twitter.com/KgN3Ywy7lt

Addressing officer trainees of the MES, who had called on the president at the Rashtrapati Bhavan, she said they have joined the services at a time when India has just entered into the Amrit Kaal and has also assumed G20 Presidency. “It is the time when the world is looking towards India for new innovations and solutions.”

“As officers of Military Engineer Services, they would be instrumental in providing rear line engineering support to all the defence arms, that is, Army, Air Force, Navy, Coast Guard and other organizations. The dedicated engineering support that they provide to the armed forces enhances their overall performance and keeps them prepared to meet any exigencies,” she said.

The President said that as young officers in the field of construction, MES officers have a prime duty to care for the environment also. “We must move towards increased use of renewable energy for sustainable development.”

She noted that the MES is greatly contributing in reducing the national carbon footprint by completing a large number of Solar Photovoltaic projects. She said that they can innovate and use new building materials that protect residents from hazardous chemicals. The overall human well-being increases when surrounded by natural materials, she added.

The President said that construction sector is very dynamic and the technologies are changing very fast. “This sector plays a major role in economic growth and development.”

President Murmu urged them to make use of cutting-edge technologies such as machine learning and artificial intelligence in their future projects. She said that this would help in a more efficient design and reduced time frame for construction.

The President was happy to note that MES has completed the first ever 3D Printed Houses at Gandhinagar, Gujarat. She urged MES officers to try to use more such technologies that are cost effective and help in avoiding wastage. She also urged to promote recycling of materials wherever possible.