KCR takes on Modi as BJP begins to bite in Telangana 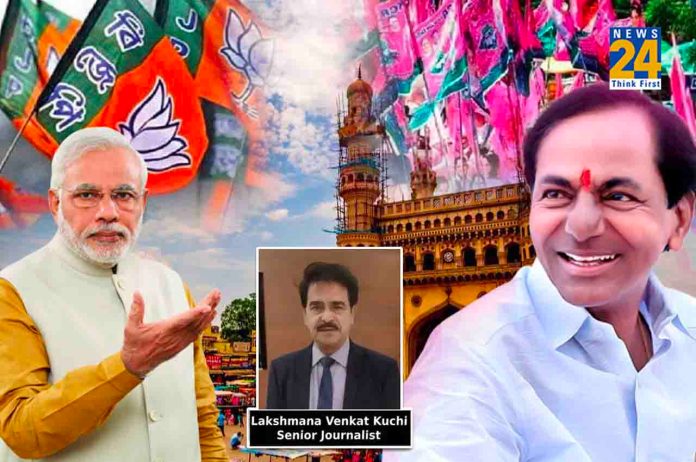 A hyperactive Enforcement Directorate and its focus on alleged corruption of opposition leaders and on states ruled by non-BJP governments – West Bengal, and Maharashtra – and the public display of unexplained mounds of hard cash recovered during raids beamed on television screens for sure severely damage the image of the political parties they belong to.

Whatever action TMC president and West Bengal Chief Minister Mamata Banerjee has taken against her close aide and minister Partha Chatterjee post his arrest does not absolve her party in the people’s court and for sure she and her party have come on the backfoot. The BJP has already trained its guns on her as well.

Moving onto Maharashtra, detention of Shiv Sena leader Sanjay Raut in connection with an alleged land scam case, is yet another case in point of opposition’s charge of “misuse” of ED. Already Shiv Sena Rajya Sabha MP Priyanka Chaturvedi has given a notice for discussion on Misuse of ED in Rajya Sabha.

But it is in Telangana that the BJP’s political moves and its campaign against the Chief Minister K Chandrashekhar Rap’s corruption and dynastic politics becomes interesting as this is the state that the BJP is focusing in its Southward push, in the region that sends 130 MPs to Lok Sabha.

Besides, Telangana is the state that sent four BJP MPs to Lok Sabha in the previous elections and even in the recently held Greater Hyderabad Municipal elections, the party performed very well.

Incidentally, in the last Lok Sabha elections, the BJP also defeated KCR’s daughter in a major embarrassment to him and his party.

On top of the BJP’s ‘charge sheet’ against the chief minister KCR is that he and his family have allegedly misappropriated central government funds and that they mismanaged the huge allocations of Rs 87,000 crore disbursed for irrigation projects.

For the present, these are only allegtions, but they give a clear cut signal as to the shape of things to come. The local BJP leaders talk about taking KCR and his family to the cleaners.

With leader after BJP leader, including Prime Minister Narendra Modi, Union Home Minister Amit Shah and party president JP Nadda focusing on corruption and dynastic politics at the BJP’s National Executive Meet held in Hyderabad recently,  it is clear what to expect in the run up to the state assembly elections due next year.

After Karnataka, the BJP’s first entry gate into South India, it is Telangana where the BJP sees a potential and future – after its strong showing in December 2020 municipal elections in Hyderabad increasing its seats by 10 times to 44 from a mere 4.

As the state is a key component of the BJP’s South India plan, it threw in its entire battery of senior leadership in even municipal elections and the results are there for everyone to see.

Sensing a threat to his own base now, Telangana CM and TRS chief KCR has also launched into electoral campaigns, so to speak, and begun targeting the Prime Minister directly – holding him accountable for the economic situation in the country.

More important, unlike any other opposition leader, KCR donned the role of a fact-checker and plays video recordings from Prime Minister Modi’s past speeches to “catch” his “lies”.

A case in point is the price at which power is sold to state governments, when Modi ji claimed that it was sold to states at Rs 1.10 per unit.

“Why are you lying Modi ji, when was power sold to states at Rs 1.10 per unit,” KCR questioned.

Whether it is the issue of price rise, or the steadily declining value of the Indian Rupee in Dollar terms, KCR plays out Modi’s powerful speeches castigating the then Prime Minister Manmohan Singh for his failures on the economic front – and then urges the Prime Minister to answer the same questions that he posed to Dr Singh.

For a party that voted on most issues along with the NDA government in Parliament, the TRS has come a long way, joining the opposition bandwagon.