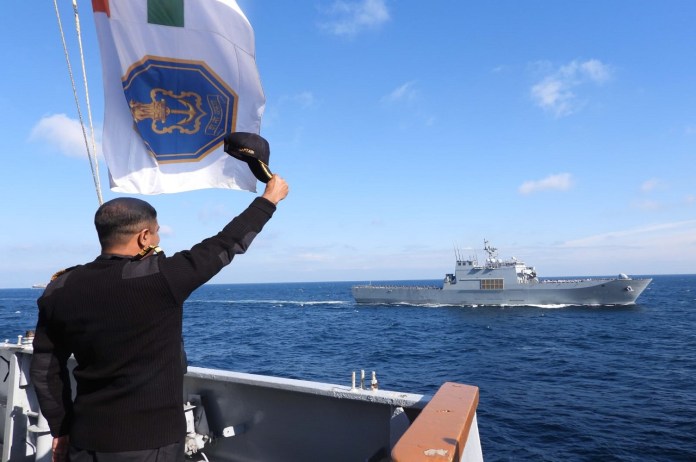 New Delhi: The Indian Naval Ships Shivalik and Kamorta complete their visit to South Korea, the Ministry of Defence said in a press release on Friday.

“Indian Naval Ships Shivalik and Kamorta, during their stay at Busan from 21 to 23 Nov, participated in multiple activities with the Republic of Korea (RoK) Navy that included official and social interactions, cross-deck visits and sports fixtures,” it said.

The Commanding Officers of both Indian ships also called on Vice Admiral Kang Dong Hun, Commander Republic of Korea Fleet, who welcomed the Indian ships and discussed avenues to further strengthen maritime cooperation between Indian Navy and the RoK Navy.

Vice Admiral Kang visited INS Shivalik and interacted with the Ambassador of India to RoK Amit Kumar, it said.

On departure from Busan, Shivalik and Kamorta undertook a Maritime Partnership Exercise with RoK Navy Ship No Jeok Bong. The exercise signified the close bonds of friendship and further enhanced interoperability between both the navies.

The strength of Indian Navy has been improved as a second ship of Project 15B stealth guided missile destroyers being built at Mazagon Dock Shipbuilders Limited (MDL), was delivered to the Indian Navy on November 24, the Navy official said, as reported by news agency IANS.

The ship is 163 metres long and 17 metres wide, displaces 7,400 tonnes when fully loaded and has a maximum speed of 30 knots. Apart from myriad indigenous equipment in the ‘Float’ and ‘Move’ categories, the destroyer is also installed with under-mentioned major indigenous weapons. The overall indigenous content of the project is approximately 75 per cent,” a defence ministry official said.