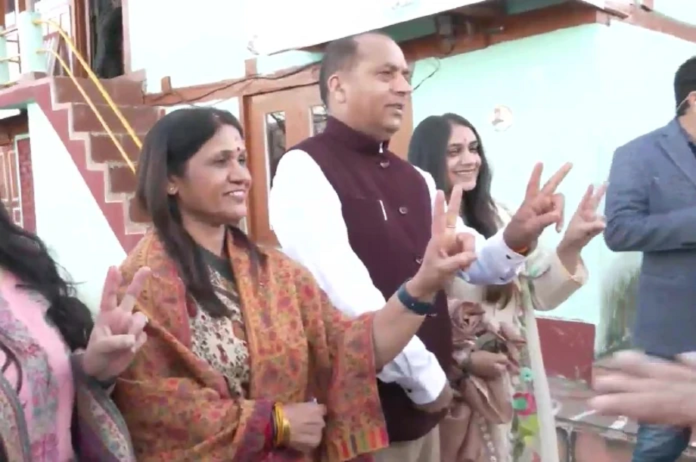 The high-voltage campaigning by political parties ended on November 10, and it is now up to Himachal Pradesh voters to decide the political fate of the candidates.

They're careerist leaders, realised that they'll gain nothing in HP & Guj. Once they feel they're winning or can win, they'll all come here for credit. They know they won't gain anything. So they won't be seen: BJP chief on Rahul Gandhi not campaigning for #HimachalElection2022 pic.twitter.com/KpITbjOS7Q

Confident of a grand win. Feedback is great. Most importantly, people are casting their votes peacefully, he said. pic.twitter.com/UbPnheSuej

A young voter who came to vote said that voting should be taken as a responsibility, whereas today’s generation takes it very lightly. Young voters said that more facilities should be given in rural areas.

There is excitement. We are happy and relaxed. Mandi has always supported (CM Jairam Thakur). People must have seen the development that happened and they will definitely vote for BJP: Chandrika Thakur, daughter of CM Jairam Thakur#HimachalPradeshElections pic.twitter.com/cxOyGCawi5

Poll is being contested to take state forward & change its condition. This isn't just about Congress leaders & workers but about future of the state. Current govt suppressed &overlooked voices of all sections of society: Vikramaditya Singh, Congress MLA#HimachalPradeshElections pic.twitter.com/DNAu1CBvam

HP | Our govt formed yet again in Uttarakhand, UP, Manipur & Goa, it will happen this time in HP & Gujarat, as well… Congress has a habit of making false promises & the public knows their real face: Anurag Thakur, Union Minister & BJP MP from Hamirpur#AssemblyPolls2022 pic.twitter.com/1uOkbbGmDM