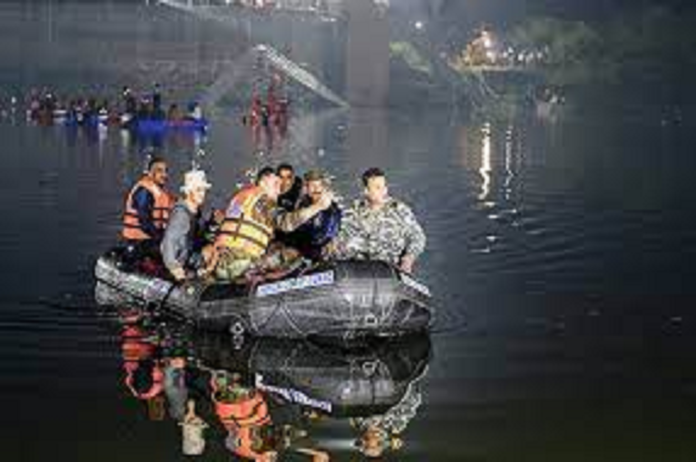 Morbi (Gujarat): At least 132 people died in the Morbi hanging bridge collapse incident, Gujarat Home Minister Harsh Sanghavi informed on Monday. The Gujarat Home Minister added that a criminal case has already been filed in connection with the incident. He said, “An investigation has begun today under the leadership of Range IGP,” Sanghavi said. Everyone worked all through the night. The Navy, NDRF (National Disaster Relief Force), Air Force and Army arrived at the spot quickly. More than 200 people have worked the entire night for search and rescue operations.”

After the bridge collapsed, teams from the Army, Navy, Air Force, NDRF, and Fire Brigade investigate through the night for the Garkaw victims in the Macchu river, according to officials.

According to information provided by the district government, the system was instantly triggered following the accident, and rescue efforts were initiated with the assistance of residents.

In addition to this, teams from other locations started showing up at the location. The injured were given emergency care at the Morbi Civil Hospital by about 40 medical professionals from several clinics, Rajkot PDU Hospital, and Surendranagar Civil Hospital.

Following the bridge collapse, the Rajkot Municipal Corporation boat arrived in Morbi with emergency supplies, including life jackets, and the rescue effort was initiated.

Throughout the night, emergency ambulances from the municipalities of Rajkot, Jamnagar, Junagadh Metropolitan Municipality, and Morbi Municipality operated to transport the injured as soon as possible to the hospital. The rescue effort also included a number of private ambulances. Army squad from Surendranagar told officials that it had joined with its three ambulances and equipment.