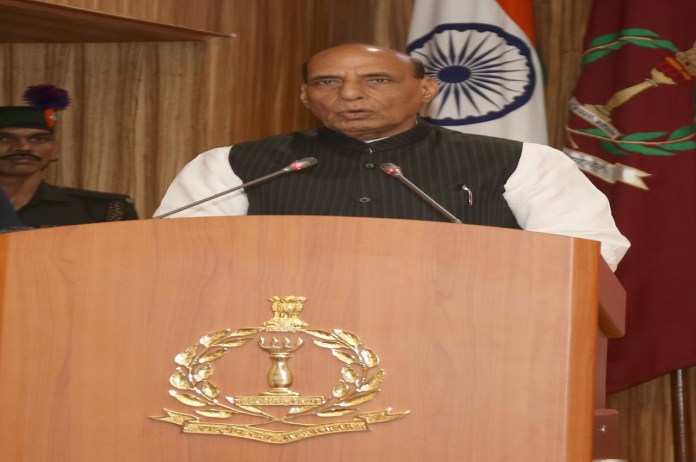 New Delhi: India does not believe in a world order where few are considered superior to others, Defence Minister Rajnath Singh said on Thursday noting that forging relations comes naturally to India, as we work towards mutual economic development.

Speaking at the convocation ceremony in the National Defence College here, Singh called for concerted efforts of the international community to counter “grave” emerging security threats such as cyber-attacks and information warfare.

India believes in a multi-aligned policy, not a world order where few are considered superior to others.

He asserted that terrorism, which generally falls into internal security, is now classified in the category of external security, as training, funding and arms support of such organisations is being carried out from outside the country.

The vulnerability of critical infrastructure to cyber-attacks as a big concern, Singh said, sectors such as energy, transport, public sector services, telecommunications, critical manufacturing industries and interconnected financial systems are prone to such threats.

The defence minister is of the view that information war has the potential to threaten the political stability of a country.

“The deployment of information war was most evident in the ongoing conflict between Russia and Ukraine. Throughout the conflict, social media has served as a battleground for both sides to spread competing narratives about the war and portray the conflict on their own terms,” the defence minister said.

Singh described national security as the prime focus of the Modi government, stressing that the full potential of the country can be tapped only when its interests are protected.

The Minister said that the Russia-Ukraine conflict has fuelled an energy crisis in the world.

“In Europe, oil and gas supply has been dwindling. India has also been affected as the Russia-Ukraine war led to a disruption in international energy supply, making the energy import much more expensive,” he said.

Singh said that Russia and Ukraine together export nearly a third of the world’s wheat and barley. But this conflict had prevented grain from leaving the ‘breadbasket of the world’ and led to food crisis in various African and Asian countries,” the Minister added.

The defence minister said India believes in a multi-aligned policy, realised through diverse engagements with multiple stakeholders, so that the concerns of all can be addressed for a prosperous future.

Singh said a strong and prosperous India would not be built at the cost of others. ”Rather, India is here to help other nations realise their full potential.” Singh said if security becomes a truly collective enterprise, ”we can think of creating a global order which is beneficial to all of us”.

When we partner with any nation, it is on the basis of sovereign equality and mutual respect, he said, adding forging relations comes naturally to India, as we work towards mutual economic development.