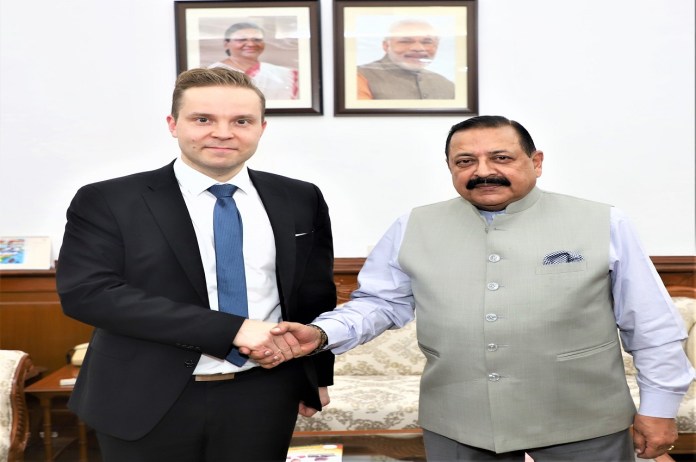 New Delhi: India and Finland agree to carry mutual cooperation between the two countries to a new level and enhance partnership in areas such as Digital Partnership in Future ICT, Future Mobile Technologies and Digital Education, Ministry of Personnel, Public Grievances & Pensions, said in a statement, on Monday.

India and Finland also agreed to carry mutual cooperation between the two countries to a new level in a number of areas of bilateral as well as global interests.

As per the release, Finland Minister of Education and Culture, Petri Honkonen called on Union Minister of Science and Technology Dr Jitendra Singh at North Block today to seek enhanced bilateral cooperation between the two countries in the field of Science, Technology and Innovation (STI).

He was accompanied by a high level delegation which later held a separate meeting with the Indian delegation in the presence of the two Ministers.

“Two nations decided to enhance cooperation in areas such as Digital Partnership in Future ICT, Future Mobile Technologies and Digital Education,” the release said, adding that the two countries also emphasised on having institutionalised joint working groups on areas of mutual interest.

Singh also reiterated India’s focus on collaboration even in StartUps. He also recalled that following the signing of the joint declaration during the visit of Mika Lintilä, Minister of Economic Affairs, Finland on 18th April 2022, both sides have initiated collaboration in Quantum Technologies. Indian side has already identified four premier institutes viz IISER, Pune, IIT Madras, TIFR Mumbai and C-DAC Pune to work with Finnish institutions on joint development of Quantum Computer.

The Minister expressed satisfaction that experts from both sides are working out detailed plan for establishment of the Indo-Finnish Virtual Network Centre on Quantum Computing and targeting to develop 20 qubits superconducting based Quantum Computer in 1st phase and further scale it up to 54 qubits in second phase.

Singh conveyed to the Finland Minister that India is keen to develop research collaborations with Finnish R&D institutions and technology collaboration with Finnish Industry especially focusing on the application of Quantum Computing.

According to the statement, Honkonen assured Singh that Finland is keen to cooperate with India in 5G, Environment and Clean Technologies, Bio-based Economy, BioBanks and Affordable Healthcare. He said progress is also on subjects flagged by Indian and Finnish Prime Ministers.

India and Finland have strong bonding in Science, Technology and Innovation. Within the framework of S&T agreement, the Department of Science and Technology, Department of Biotechnology, Government of India and the Ministry of Economic Affairs and Employment of Finland together with Business Finland and Academy of Finland have been successfully collaborating for over a decade.