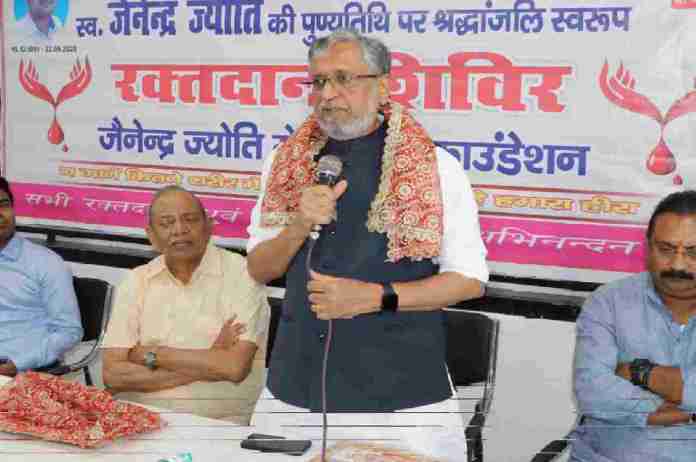 New Delhi: Senior Bharatiya Janata Party (BJP) leader Sushil Kumar Modi Saturday took a dig at the Congress president polls saying that whoever will hold the post will be a “puppet” of the Gandhi family.

“Kharge or somebody else, whoever becomes the chief, he will only be a face to show and would be a puppet of the Gandhi family as the actual decisions will be taken by them only,” Sushil Modi said.

During his conversation, Modi also spoke about Congress Shashi Tharoor whose election manifesto showed a a “distorted map of India” with omitted parts of Jammu and Kashmir and Ladakh.

“It cannot be a mistake, the way Shashi Tharoor removed Jammu and Kashmir and Ladakh from the map of India reflect his mentality as it is not possible to remove such an important region of the country,” he said adding that his confession to the mistake, which is unforgivable, reflects Tharoor’s and the Congress party’s mentality.

Friday was the last day for filing nominations for the election of the Congress president, where a total of three leaders have staked their claim for the post.

According to Congress Central Election Authority chairman Madhusudan Mistry, 14 forms have been submitted by Mallikarjun Kharge, five by Shashi Tharoor and one by Jharkhand leader KN Tripathi.

Kharge, who has resigned from the position of Leader of Opposition in the Rajya Sabha, has good relations with the Gandhi family, especially Rahul Gandhi.

So far, Kharge is believed as a strong candidate and if he becomes the party president, Congress will get a Dalit chief after 51 years.

Hitting out at the Bharat Jodo Yatra, the former Bihar Deputy CM said that the country does not need any march to save it, and “Rahul Gandhi should rather march to save his party.”

Reacting to the Congress leader’s comment that ‘no force can stop Bharat Jodo Yatra’, Sushil Modi said, “Who is stopping Rahul Gandhi from marching? Do it but while you talk about unifying the country, is India divided? Which India is it that Rahul Gandhi is talking about uniting, India is already united. It is Congress Jodo Yatra as the party is breaking up.”

“The Congress is in power in only two states, Rajasthan and Chhattisgarh. Everyone saw what happened in Rajasthan and now Rahul Gandhi’s party is being challenged why is he marching when somebody else is becoming the party’s president,” he added.

A political crisis had erupted in Rajasthan, following the mass resignations by party MLAs ahead of the speculations of Sachin Pilot becoming the Gehlot’s successor if he contested for party’ top post.

A legislative party meeting was scheduled on the evening of September 25 at the residence of Chief Minister Ashok Gehlot in the presence of the observers, which was attended by the Sachin Pilot and his camp MLAs, however, the Gehlot loyalists had held a meeting with Cabinet Minister Shanti Dhariwal at his residence, following which over 90 MLAs had submitted their resignations to Speaker CP Joshi.

However, Gehlot did not file his nominations and pulled out of the race amid political turmoil in his state.

Congress’ presidential post-election will be held on October 17 and the election results would be declared on October 19.