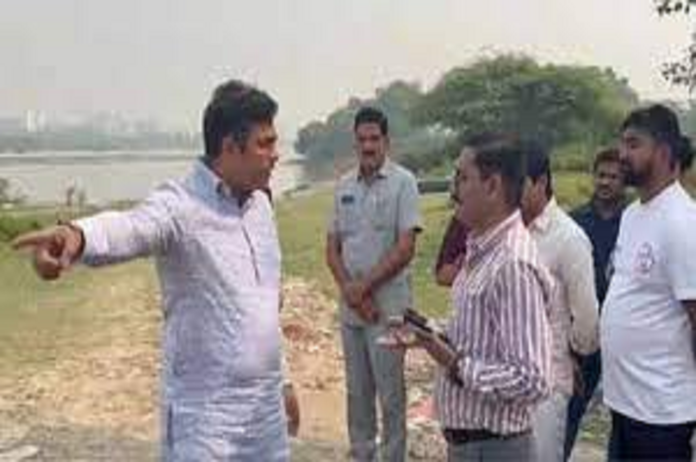 New Delhi: BJP MP Parvesh Sahib Singh on Friday threatened Delhi Jal board members over the cleaning of Yamuna River during ongoing Chathh Puja. The Delhi Jal Board has started spraying chemicals in Yamuna to reduce toxic foaming in the river so that devotees could enter the river and offer prayers to Sun. Knowing about the cleaning exercise of Yamuna, BJP MP reached the spot and started creating hindrance in the work of DJB team. He indulged in verbal fighting with them in order to stop them from spraying chemicals in Yamuna.

The one-and-a-half minute video showed Verma threatening a Delhi Jal Board (DJB) officer with pouring a chemical being used to control frothing in the Yamuna on his head.

“You are killing people here. You failed to clean Yamuna in eight years and now adding chemicals in the river. Go and take a dip into the river”, said the MP as shown in video.

When the DJB officer defended the use of chemical saying that it is approved by food and drug administration of USA and national mission of cleaning Ganga of Cental government and it is used to control ammonia phosphorous foam, Verma rebuked him said “People will come to take a dip in the river (during the chathh) and you are saying it is approved. Shall I pour it on your head.”

Later, Parvesh Sahib Singh also accused the Delhi government of wasting rupees five thousand crore in the name of cleaning the Yamuna. Along with this, he has accused Delhi Chief Minister Arvind Kejriwal of mixing poison in the name of cleanliness in Yamuna. He has told this deadly crime. Nowadays Yamuna is full of foam and its water has turned black. In view of Chhath Puja, the Delhi government is getting a chemical called silicon sprayed in Yamuna. Aam Aadmi Party and BJP have come face to face regarding this.

Meanwile, Delhi Jal Board (DJB) Vice Chairman Saurabh Bhardwaj in reply to BJP allegation said it is “absolutely incorrect” to say that a “poisonous” chemical is being used to suppress the foam in the Yamuna, following the BJP’s allegations over the issue.

It is also noted that when BJP MP Parvesh Sahib Singh Verma and DJP members were fighting, local residents came in support of the DJP members and said BJP itself does not do anything and is threatening the officers of Delhi government.