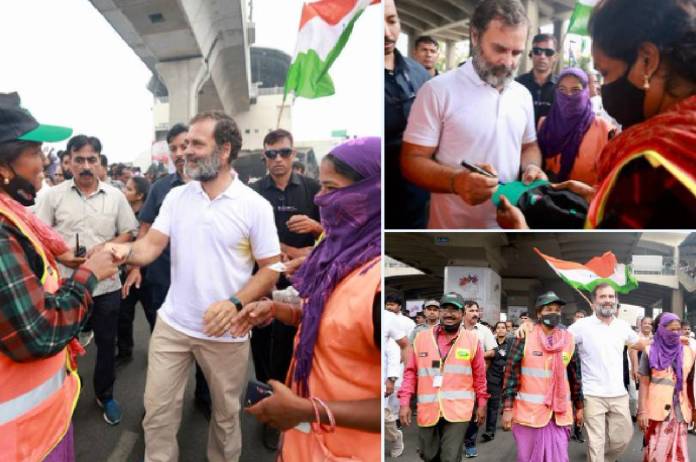 The visuals of the Congress’ mega rally show Rahul Gandhi walking side by side with several workers of GHMC as supporters hailed “Bharat Mata”.

“Privileged to have walked beside the diligent GHMC staff. People from many walks of life have supported our fight for social justice,” said a post of Congress’ Twitter handle.

Sanitation Workers Being Harassed By GHMC

The Bharat Jodo Yatra of Congress happens to enter Telangana at a time when GHMC staff has been struggling to get their monthly pay. It was alleged that the administration has not released salary of workers for a couple of months now, leaving them helpless.

On Tuesday morning, a frustrated sanitation worker Lakshmi attempted suicide before GHMC head office, alleging that she has not received her salary for several months. She was rescued by her fellow workers stationed at the head office.

Lakshmi also alleged that the workers are being harassed by their supervisors who are not just halting their pay release but also forcing them to work in a team of 10 whereas the norms mandate at least 12 people in the group.