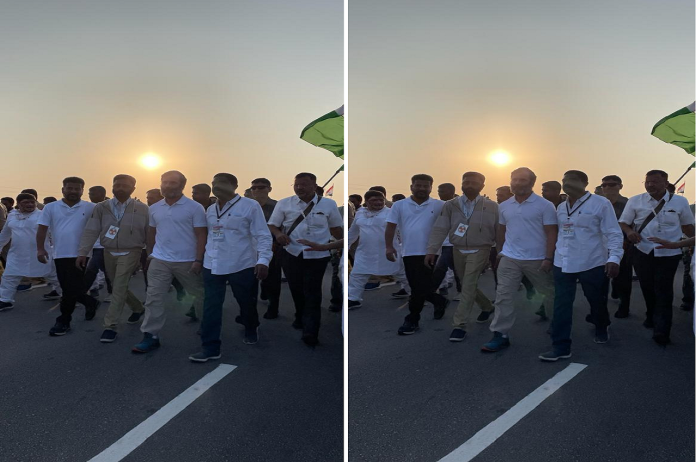 The Padyatra in Telangana began on October 24 and it took a single break in the state on October 28.

After a day or respite, the Congress on Saturday kickstarted its Bharata Jodo Yatra from Choutkar in Telangana which will rest at Gadi Peddapur in the end of the day.

The Padyatra will begin from Fathlaput Bus stand in Kamareddy and halt in Shekhapur. It will resumr public meeting in Menoor, Kamareddy. Then the yatra will continue from Mirjapur Hanuman Mandir followed byhis enterance in Maharashtra.

The Congress leaders will be welcomed by the workers of MPCC in degloor, Maharashtra, at Chhatrapati Shivaji Statue, Kalamandir. Then, the yatra will leave and halt at Gurudwara Yaadgari Baba Zoravar Singh Ji, Fateh Singh Ji.

The leader will rest in Degloor, Nanded for the night.

A new chapter begins as we make our way into the magnificent Maharashtra.

The #BharatJodoYatra will resume from Kamareddy district, Telangana today and enter Maharashtra later in the evening. pic.twitter.com/QJyaK2KAfQ