Best of Bharat: Best policies and decisions of Independent India 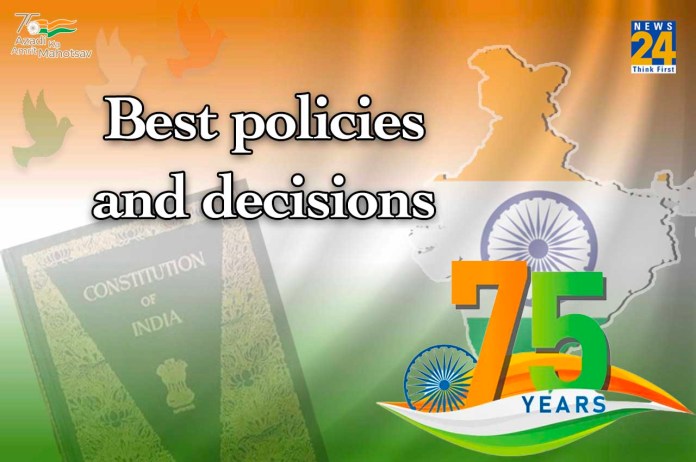 New Delhi: Indian Government has bought in a lot of policies and have made some major decisions to transform Indian Policies after India achieved its independence from the British Raj. Here are the top 5 major policy decision that has shaped the identity of today’s India.

World’s largest biometric ID system is Aadhaar. The Chief Economist at the World Bank, Paul Romer, called Aadhaar “the most advanced ID program in the world.” Aadhaar does not by itself confer any rights to domicile in India; rather, it is seen as a proof of residence rather than a proof of citizenship.

Aadhaar, a 12-digit unique identity number. The Home Ministry made it clear in June 2017 that Aadhaar is not a recognized form of identification for Indian citizens visiting Nepal and Bhutan.

The UIDAI had been operating as an associated office of the Planning Commission (now NITI Aayog) since January 28, 2009, before the Act was passed. A money bill to support Aadhaar was introduced in the Parliament on March 3, 2016.

The Aadhaar (Targeted Delivery of Financial and Other Subsidies, Benefits, and Services) Act, 2016, was approved by the Lok Sabha on March 11.

According to the 2016 Aadhaar (Targeted Delivery of Financial and Other Subsidies, Benefits, and Services) Act, the data is gathered by the Unique Identification Authority of India (UIDAI), a statutory body created in January 2009 by the Indian government and operating under the Ministry of Electronics and Information Technology.

The Mahatma Gandhi National Rural Employment Guarantee Act, also known as MGNREGA, was renamed from the National Rural Employment Guarantee Act of 2005, or NREGA, in 2009. The “right to work” is protected by social security and labour legislation in India. Following the introduction of the bill in the parliament by the Minister for Rural Development, Raghuvansh Prasad Singh, this act was passed on August 23, 2005, during the UPA administration of Prime Minister Manmohan Singh.

It aims to increase the security of livelihood in rural areas by giving at least one adult household member who volunteers to perform unskilled manual labour at least 100 days of paid employment in a fiscal year. Under the MGNREGA, women are promised a third of the available jobs. Making durable assets is one of MGNREGA’s other objectives (such as roads, canals, ponds and wells).

In accordance with Indian labor legislation, the Minimum Wages Act of 1948 establishes the minimum wages that must be provided to both skilled and unskilled laborers.

According to the Indian Constitution, a “living wage” is the amount of money that a worker must earn to maintain a minimal quality of living, including good health, dignity, comfort, and education, as well as to cover any unexpected expenses. However, the constitution has specified a “fair wage” in order to take into account an industry’s ability to pay.

A fair salary is one that takes into account the capacity of the industry to pay while also attempting to raise employment levels. According to public opinion, the government should set an annual wage change like other nations do because of unfair attention given to the decades-old regulation, which is currently being misused by large corporations to underpay their employees.

A special purpose court in India is called the Consumer Court. It focuses mostly on consumer-related problems, disputes, and grievances. Hearings are held in court to resolve these disagreements.

The court’s primary concern when consumers bring a claim is whether they can provide evidence of the exploitation, such as bills or purchase notes. In situations when no such proof is offered, courts rarely find in the plaintiff’s favor.

The Court bases its decision primarily on infringement of consumer rights (if any). The purpose of creating a separate venue for consumer disputes is to guarantee that these conflicts are quickly and inexpensively handled.

The rights provided by the Court are listed below:

Right to Safety: The right to be protected from all types of hazardous goods and services.

Right to Information: The right to be fully informed about the performance and quality of all goods and services.

Right to Choose: The right to freely choose goods and services.

Right to be Heard: The right to be heard in all decision-making processes related to consumer interest.

Right to Seek Redressal: The right to seek compensation, whenever consumer rights have been infringed.

Right to Consumer Education: The right to complete consumer education.

The NDA administration passed the Prevention of Money Laundering Act, 2002, into law to combat the practise and make provisions for the forfeiture of assets obtained through it. Starting on July 1, 2005, the PMLA and the Rules thereunder went into effect. Banking firms, financial institutions, and intermediaries are required by the Act and Rules made thereunder to confirm the identification of their clients, keep records, and provide the Financial Intelligence Unit-India (FIU-IND) with information in the prescribed format. The law was amended in 2005, 2009, and 2012.

A provision in the Prevention of Money Laundering Act that made it nearly impossible for a person sentenced to more than three years in prison to seek bail. If the public prosecutor objected was overturned by the Supreme Court on November 24 in a decision in favour of individuals’ rights.

Section 45 of the PMLA Act, 2002 states that the public prosecutor, a government-appointed individual, must be given the opportunity to contest any bail granted to a person for any offence under the Act.