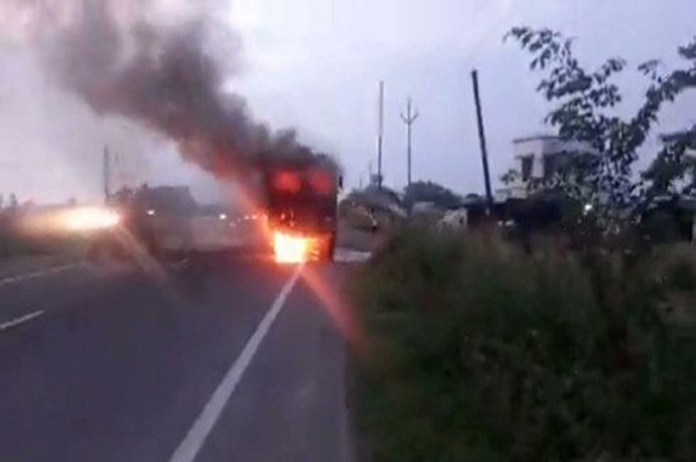 New Delhi: Three people were killed in a collision between a police bus and a bike in Bihar’s Chhapra-Siwan road on Wednesday. The Bihar police bus dragged the bike for a couple of metres before its fuel tank burst into flames.

Reports suggest that as soon as fire broke out, the youth riding the bike got trapped under the bus and was burnt alive. All three people sitting on the bike died on spot after it collided with the bus.

After the bus caught fire, a total of 24 policemen, who were onboard the bus, got down and fled from the scene.

The incident happened on Tuesday evening near Deoria village on National Highway-531 of Revelganj police station area of Saran district.

According to the locals, the speed of the police bus was very fast, due to which the bus and the bike riders collided head-on.

After the collision, the bike got stuck under the bus and dragged on for a few meters before the diesel tank caught fire. All three people riding on the bike died on the spot.

The deceased were identified as Kundan Manjhi (22), Bulbul Manjhi (25) and Kishore Manjhi (24), all residents of Panchbhinda village.

Reports said that the police personnel were returning from Sitab Diara where they were deployed at the programme to mark the 120th birth anniversary of Jayaprakash Narayan, which was attended by Union Home Minister Amit Shah and UP Chief Minister Yogi Adityanath.