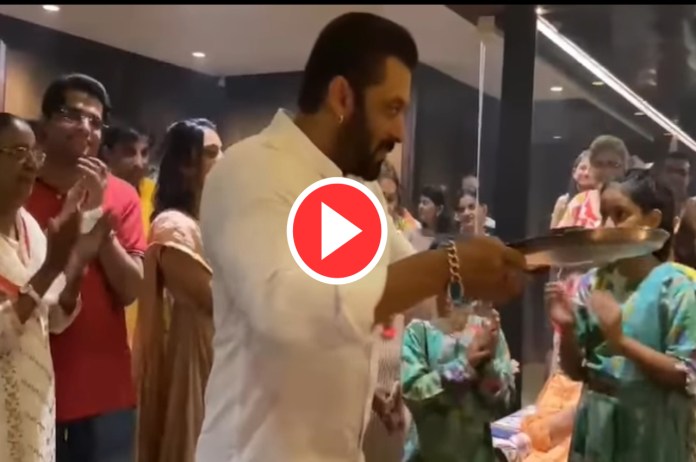 New Delhi: Bollywood megastar Salman Khan was recently spotted outside the house of his sister Arpita Khan for the Ganesh Chaturthi.

In the ceremony, he performed a Ganesh aarti and shared a video on Instagram on Wednesday evening, in the clip, he gave a glimpse from the inside of the celebrations. For the occasion, Salman donned a white shirt, and blue denim paired with black shoes. He captioned the post with, “Ganpati Bappa Morya!”

The video also shows Arpita Khan, her husband Aayush Sharma and their son, Ahil Sharma, doing aarti together. In the clip, Salman can also be seen dancing to the music played in the background and others can be seen clapping to the music. Arpita stood next to him with daughter Ayat Sharma sleeping in her arms.

Bollywood actor Riteish Deshmukh and his wife Genelia D’souza was also seen doing aarti in the video. The couple was accompanied by their children–Riaan and Rahyl Deshmukh. Meanwhile, Salman Khan’s mother Salma was seen sitting on a sofa near the altar.

Many Bollywood celebs attended the celebration including actor Katrina Kaif and her husband-actor Vicky Kaushal. Katrina was looking very beautiful in lime-yellow sharara, and Vicky opted for a yellow kurta. Arpita’s brother Sohail Khan was also spotted outside her house.

On the work front, Salman has many many films in the pipeline including Kisi Ka Bhai Kisi Ki Jaan opposite Pooja Hegde, Venkatesh Daggubati, Jagapathi Babu, Raghav Juyal, and Shehnaaz Gill. Helmed by Farhad Samji and will release on December 30, 2022. He also has Tiger 3 with Katrina Kaif.