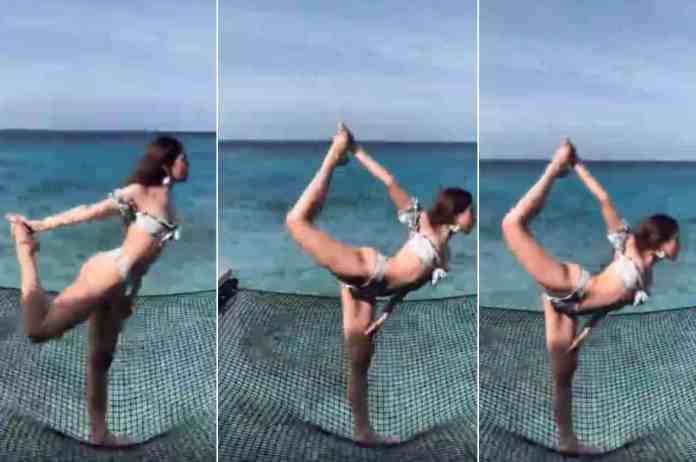 New Delhi: Alaya F is having the time of her life in the Maldives, one of the most sought-after holiday destinations by Bollywood celebs. After enjoying the ‘Maldivian dhoop’, she is onto her next adventure. The Jawaani Jaaneman is making every head turn with her recent post. Alaya Wednesday took to Instagram to share a video of herself, sending fans into total frenzy. Dressed in a bikini, she is seen standing on a trampoline and performing Natarajasana while balancing on one leg. “As you can see, I have very little regard for my personal safety… totally worth it for magic moments like these…” she said in the caption. Check out Alaya F’s post below:

Alaya donned a tropical printed bikini and teamed her outfit with hoops as she performed the complex yoga pose. Her top featured ruched detail on the neck, a bow on the front and the low-rise bottoms had high leg cut-outs. Her fans were totally bewildered after witnessing this attempt and showered Alaya with compliments in the comment section. “You’re crazy talented,” wrote one fan, while another mentioned, “Damnnnnn That’s tough though”. “The perfect Arch,” another netizen mentioned appreciating the actor.

Earlier, Alaya had made a splash as she flaunted her toned body in a printed bralette and shorts set which she teamed with a matching cape. “Feelin’ like Jaadu enjoying the Maldivian dhoop,” she captioned her post. Check out below:

Alaya is also into dancing and often shares quirly videos of herself. Recently, she took up a popular Insatgram dance challenge and shared a video of herself with the caption: “Hopping onto trends because Instagram says so🙄🤪 quick choreography in a quick class with @yasshkadamm”

Meanwhile, on the work front, Alaya F will be seen in Freddy with Kartik Aaryan. She will also be seen in U-Turn, which is a remake of the 2016 Kannada film.