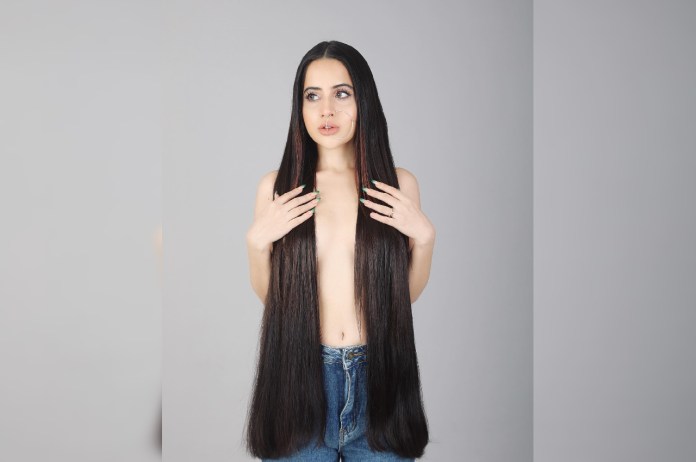 New Delhi: The social media fame, Urfi Javed stunned everyone with her bold avatars. She always managed to grab the internet’s attention with her sassy photos.

Once again, she took things to another level by posing in practically nothing but just denim jeans. Urfi’s new avatar is grabbing the eyeballs and setting fire to the internet. In the latest photos, she covered herself with her long hair. She completed her look with a simple and big nath on her nose.

As soon as the photos surfaced online, it spreads like wildfire on social media. Everyone started dropping their comments and trolled her for not wearing anything. One commented, “Kapra nhi milta hai kya tere ko.” Another wrote, “Yaar didi aap kyu ladkiyo ki izzat Duba rahe ho.”

However, some people have also praised Urfi’s boldness. Praising her hotness, some people wrote, “No one compares to u in the world u r the most sexiest women on the planet gorgeous.” Another wrote, “Inspiration,” with a heart and fire emoji.

She also shared her opinion on getting threats online in her Instagram stories. She wrote, “There are no cyber law in India, police, cyber cell hardly pays any attention to the registered complaint that’s why people refrain from reporting. People openly bully, abuse, give rape threats online but nothing. I don’t understand why do we have to ignore it?” 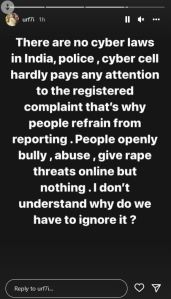 She has acted in many TV shows. She is popular for portraying the role of Avni in ‘Bade Bhaiyya Ki Dulhania.’ She was also seen as Aarti in ‘Meri Durga,’ Bella in ‘Bepannaah’ and Mira in ‘Puncch Beat Season 2’ which streamed on ALT Balaji. She played the role of Chhaya in Star Plus’s ‘Chandra Nandini’ from 2016 to 2017. A year later, she is seen as Kamini Joshi in SAB TV’s ‘Saat Phero Ki Hera Pherie.’ Then in 2020, she portrayed the role of Shivani Bhatia in ‘Yeh Rishta Kya Kehlata Hai,’ and later joined ‘Kasautii Zindagii Kay’ as Tanish Chakraborty.