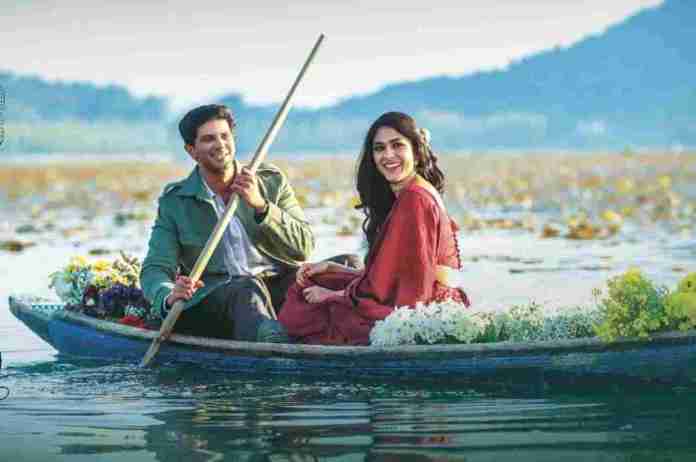 New Delhi: Sita Ramam, starring Dulquer Salmaan, Mrunal Thakur, and Rashmika Mandanna has released in theatres today. The movie, which tells the narrative of a wartime love affair, has been getting positive reviews from viewers. Dulquer portrays Lieutenant Ram in the movie, while Mrunal plays his love interest and Rashmika features as Afreen. Internet users have praised the movie and Dulquer’s performance. In the historical romance drama, Mrunal Thakur also delivered an admirable performance, and their on-screen chemistry is vibrant. Rashmika’s acting skills prowess are also being hailed by the netizens. Sumanth, Tharun Bhascker, Gautham Vasudev Menon, Jishhu Sengupta, Murali Sharma, Bhumika Chawla, and Sachin Khedekar also feature in pivotal roles in the film.

The film has been directed by Hanu Raghavapudi and bankrolled under the banner of Swapna Cinena. Those who watched the early shows of the film took to Twitter to share their opinion on the film. Check out how netizens feel about the film:

#SitaRamam is wonderful. There's so much I loved about what it tried to say – humanity over war/religion/boundaries. @hanurpudi's best thus far. More in the review which will be up later in the day

One word review:- Blockbuster
One of the best movies ever made in Romantic genre.A perfect love story with mixed emotions. #DulquerSalmaan
Played his role in a fantastic way. #RashmikaMandanna and #MrunalThakur played a fantastic characters.#SitaRamam #SitaRamamReview pic.twitter.com/2CS53TlDbH

A Request To @dulQuer

It's ok to take a break from romantic genre, but let that break be a small one 🙏#SitaRamam is a type of film which mesmerised with your good performance 👌

#SitaRamam #SitaramamReview
Movie is ultra classic with great twists and goose bump scenes. MUST WATCH IN THEATRES 🙏🙏👍👍👍👍 This movie will haunt you for days..

Specially second half, it's emotional

The visuals and the technical values are top notch. DQ did well and Mrunal completely steals the show.

Flipside, the pacing and length feel tedious at parts and could be crisper.