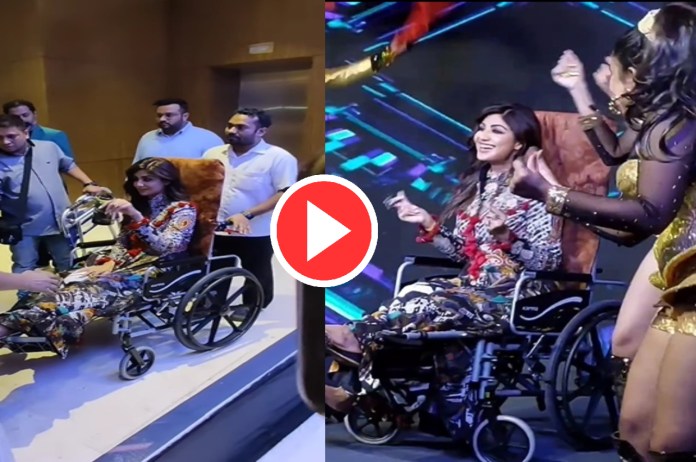 New Delhi: Bollywood diva Shilpa Shetty remains the centre of discussion these days. Recently, the actress was spotted at an event where She appeared in a wheelchair. This video of the actress has been covered on social media.

In the latest video, Shilpa is seen in a wheelchair. How serious the actress is about her work can be gauged from the fact that even after getting hurt, the actress did not shy away from fulfilling her work commitments. This cool style of Shilpa is being liked by the fans.

Talking about the look, she was seen in a multi-coloured gown. Diva is looking very beautiful in this outfit. The actress completed her look with light makeup. However, even after being in a wheelchair, the actress was exposed to the media. Shilpa won everyone’s hearts with her smile and her fans are praying for her speedy recovery.

Shilpa Shetty was hurt during the shooting of the web series. A video of the actress getting injured also surfaced on social media. She got injured while doing stunts. Although the actress herself is seen fulfilling her work commitments despite her injury.

Also Read :- I need to think like a woman and that’s my test as an actor: Nawazuddin Siddiqui

Sharing an update about the same, the actress wrote, “They said, Roll camera action – “break a leg!” I took it literally. Out of action for 6 weeks, but I’ll be back soon stronger and better. Till then, dua mein yaad rakhiyega. Prayers always work. With gratitude, Shilpa Shetty Kundra.”

Talking about the work front of the actress, she was last seen in the film ‘Hungama 2’. Just now Shilpa completed the shooting of the film ‘Sukhee’. Apart from films, the actress will soon be seen in Rohit Shetty’s web series.