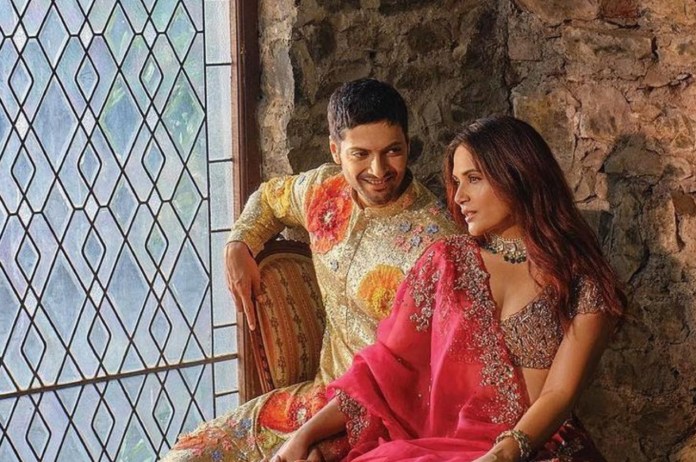 New Delhi: Richa Chadha is all set to tie a knot with actor Ali Fazal on October 6. Ali and Richa’s pre-wedding festivities have already begun in Delhi. Meanwhile, Richa took to her Instagram story and shared pictures of her Mehendi.

In the video, Richa appeared to be getting ready in front of a mirror. She shared a close sneak peek of her Mehendi, which featured their wedding logo ‘A & R’ in the middle.

In the second story, we can see her glittery nailart. She also added a quirky cat face to her Mehendi, a tribute to her pet cat Kamli. The actor was also wearing turquoise bangles.

Meanwhile, Richa and Ali were spotted outside airport yesterday as they were leaving for Delhi for their pre-wedding celebrations. Ali Fazal’s family members also arrived from Lucknow and Canada on September 28, 2022. Their Mehendi and sangeet ceremonies will take place at a friend’s home, as per reports. Their reception is said to be on October 7, in Mumbai.
The couple has been dating for over five years. Richa Chadha and Alia Fazal’s wedding is expected to be a close-knit affair. Aside from their family members, the intimate event will also see the presence of duo’s industry friends. After tying the knot, they will reportedly host a reception in Delhi and will head to Mumbai for another reception. The Mumbai reception is expected to be a gala affair with Bollywood’s who’s who in attendance. More details related to the wedding have been kept under wrap.
Richa and Ali first met on the sets of Fukrey in 2012. They will be reuniting onscreen for the third instalment of the franchise – Fukrey 3.
https://novelship.com/news/get-tramadol-50mg-online/
September 29, 2022