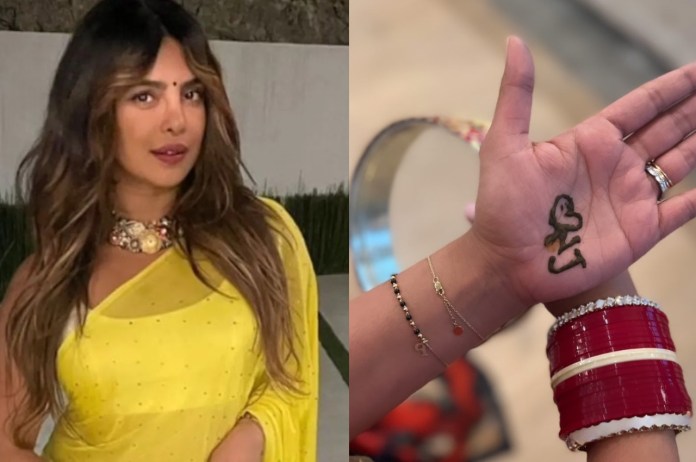 New Delhi: Priyanka Chopra shared a photo from her Karwa Chauth festivities with husband-singer Nick Jonas. After the birth of their daughter Malti Marie Chopra Jonas earlier this year, this marks the couple’s first Karwa Chauth. Karwa Chauth is a festival celebrated by married Hindu women who observe a fast for the long lives of their husbands.

Priyanka took to her Instagram Stories to share a snapshot of her hand. This year’s mehendi design featured Nick Jonas’ initials, NJ, as well as a love symbol. Priyanka was holding a sieve in her other hand in the snap. On one hand, she also wore chudas (red bangles).

Also Read :- Happy Birthday Ali Fazal: Here are some facts about the actor

She seemingly stood outdoors at her home in Los Angeles. Sharing the picture, Priyanka captioned the post, “Happy karwa chauth to everyone celebrating (red heart emoji).” She also tagged Nick in the post. For the occasion, Priyanka wore a red outfit. 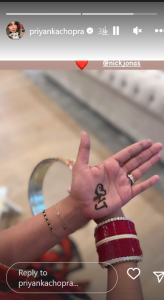 Priyanka uploaded a photo of herself on Instagram Stories on Thursday, ahead of the celebrations. As she came out of her house at night, the star donned a yellow saree with a sleeveless blouse. “Sari, sari evenings,” she had written. “Mannara, thank you for my sari!”

Also Read :- Sonam Kapoor gets back to real world, shares BTS from her Karwa Chauth look

In December 2018, Priyanka and Nick wedded in a Christian and Hindu wedding at Jodhpur’s Umaid Bhawan Palace. Following that, the couple hosted two celebrations in Delhi and Mumbai. In January 2022, the couple announced the surrogacy of their daughter Malti Marie.

Priyanka will be seen in It’s All Coming Back To Me and Citadel. Citadel, produced by Russo Brothers, will be available on Amazon Prime Video. Patrick Morgan is directing the new sci-fi drama series, which stars Richard Madden and Priyanka Chopra. She will also appear in Farhan Akhtar’s Jee Le Zaraa alongside Alia Bhatt and Katrina Kaif.