New Delhi: The makers of Katrina Kaif’s much anticipated movie Phone Bhoot have hosted a grand Halloween party on October 31. Ahead of its release, the cast and crew of the horror comedy was surprised by this unique Halloween bash. The movie also features Ishaan Khattar and Siddhant Chaturvedi in the lead role.

Above all, the three leads of Phone Bhoot took the internet by storm with their unique choice of Halloween costumes. While Katrina opted for the Harley Quinn look, Siddhant dressed up as Shaktiman. Ishaan looked spookily fun in the Willy Wonka look- the famous character from Charlie and the Chocolate Factory.

Katrina Kaif also shared a video in her Instagram handle. In the video, Vicky Kaushal was seen giving her instructions for the photo shoot.

Ishaan Khattar also took to his Instagram handle and shared a string of pictures from his Halloween look. Sharing the pictures, he wrote, “Willy Wonka has some chocolates for you 🎃💀🍬🍭.” 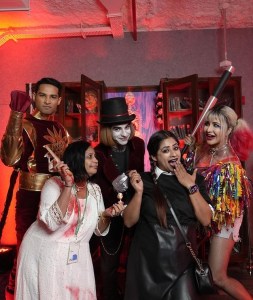 In the movie, Katrina Kaif will be playing the role of a ghost named Ragini, while Siddhant and Ishaan will be essaying roles of ghostbusters. The film will also feature Jacky Shroff and Sheeba Chaddha. Phone Bhoot, which is produced by Farhan Akhtar and Ritesh Sidhwani under the banner Excel Entertainment, is slated to hit the theatres on November 4, Friday.

On the workfront, Katrina was most recently seen in the 2021 film Sooryavanshi, co-starring Akshay Kumar. Aside from Phone Bhoot, Katrina’s next films include the third chapter of the Tiger series with Salman Khan, Merry Christmas with Vijay Sethupathi, and Farhan Akhtar’s Jee Le Zaraa starring Alia Bhatt and Priyanka Chopra.

Ishaan Khattar will be next seen in the upcoming war film Pippa. Sidhdant Chaturvedi, on the other hand, recently wrapped up the shooting of the romantic comedy Kho Gaye Hum Kahan.